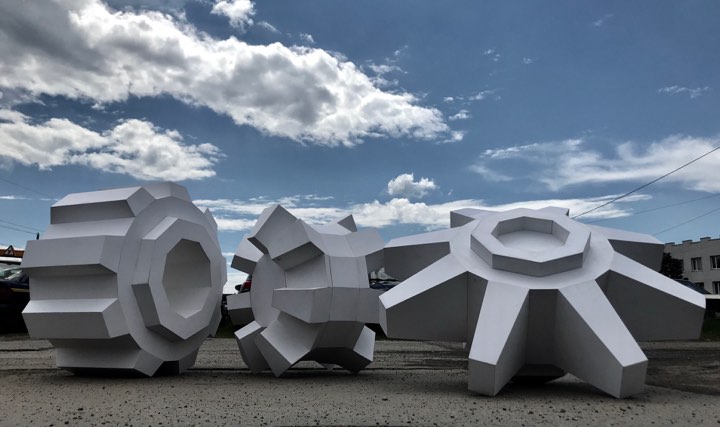 An artist and a sculptor, Vitaliy Makoviy, works mainly with volume and creates handmade large minimalistic sculptures using such materials as metal, concrete and plastic. Also, he makes kinetic installations with urbanic themes.

Vitaliy Makoviy was born in 1982 in Kyiv, Ukraine. Between 1995 and 2002 had an opportunity to visit France regularly and it considerably influenced the artist having formed his vision. Here, in France, his first exhibitions were held. Since 1995 to 2001 he studied at T. Shevchenko State Art School at the Painting department. In 2001 he entered Kyiv State Institute of Decorative and Applied Art and Design named after M. Boichuk, "Design of Environment" faculty and graduated in 2006. He has exhibiton activity, particularly co-authored with Yuriy Sivirin he created large-scale installations for Gogolfest 2016, participated in collective exhibitions in 'Chocolate House'' (a branch of the Kyiv Picture Gallery National Museum), Kyiv, Ukraine, Odesa Museum of Modern Art, created installations for music festival Brave! Factory Festival. Lives and works in Kyiv.

past
The Borders of Materiality. The Materialization of Sense
Vitaliy Makoviy