A green lawn with ravishing sculptures by Alexander Calder and Ellsworth Kelly, the beautiful modern building of Fondation Beyeler, which seamlessly blends into the landscape, and a long queue of art fans. All these people have come to see the masterpieces of the French painter Paul Gauguin. 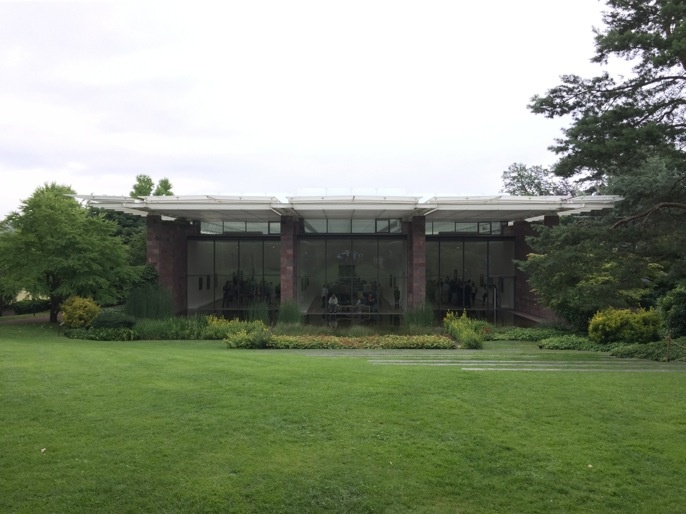 For this difficult and ambitious project to take flesh, Fondation Beyeler has spent more than six years, collecting over 50 works from 13 different countries. The exhibition organizers managed to put together the best works from his different periods. The Musée d'Orsay of Paris, the Art Institute of Chicago, Brussels’s Royal Museums of Fine Arts, New York’s MoMA, Hermitage of St. Petersburg and the Pushkin museum of Moscow are among the institutions that provided the artist’s works.

"Fabrications of sick brain, violation of Art and the Nature" – those were some of the feedback from journalists on Paul Gauguin's pictures when the maitre showed them for the first time in Paris after his trip to Tahiti. Who could have thought then that a hundred years later Paul Gauguin would be recognized as one of the most expensive and ingenious artists in the world. In February 2015, his painting Nafea Faa Ipoipo ("When will you marry?", 1892) was sold for a record 300 million dollars. 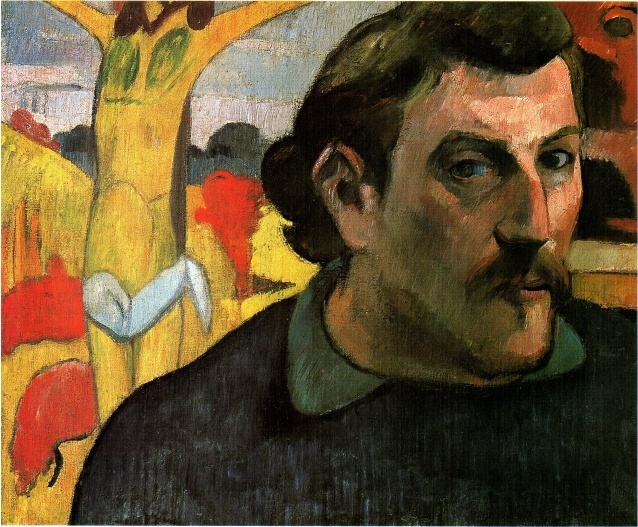 The French artist Paul Gauguin (1848-1903) remains one of the most mysterious personalities in art to this day. He became the first artist traveling to the other end of the world in search of himself and an artistic style, and the civilization’s first art critic. His manner is characterized by symbolism, synthetic generalizations, simplification of color and lines. Gauguin's paintings are emotionally rich color-wise and static compositionally. They embody everyday life and legends of the people of Oceania, sensuality and erotica, the search of life principles. These pictures are a beautiful myth about the harmony of nature and man.

But first things first. Paul Gauguin was born on June 7, 1848 in Paris in the family of a political journalist. After the coup of 1851, Gauguin's family moves to Peru. The boy is growing amid the exotic Peruvian nature whose bright colors lingered in the future artist’s memory and became the reason of his unquenchable thirst for travel and exotic countries. But the happy family idyll does not last: soon Paul becomes an orphan, and his education is administered by his uncle. 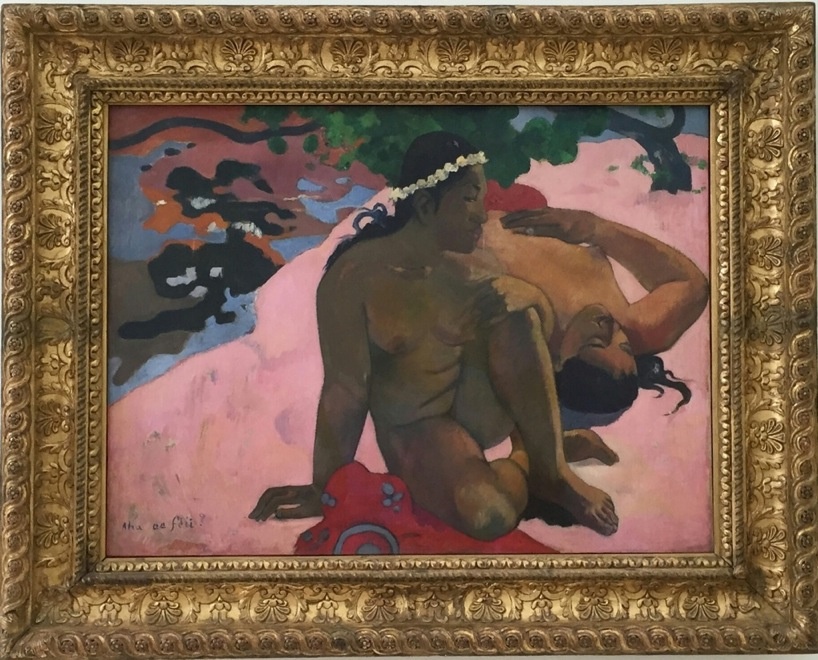 Since 1855, Paul is back in France where he studies at school, which he dreams of running from and becoming a seaman. At 17, he starts sailing on ships cruising between South America and Europe.

In 1871, thanks to the uncle's patronage, Paul Gauguin gets a job in a Parisian bank. Here he makes a successful career, marries, starts collecting paintings and tries painting himself. 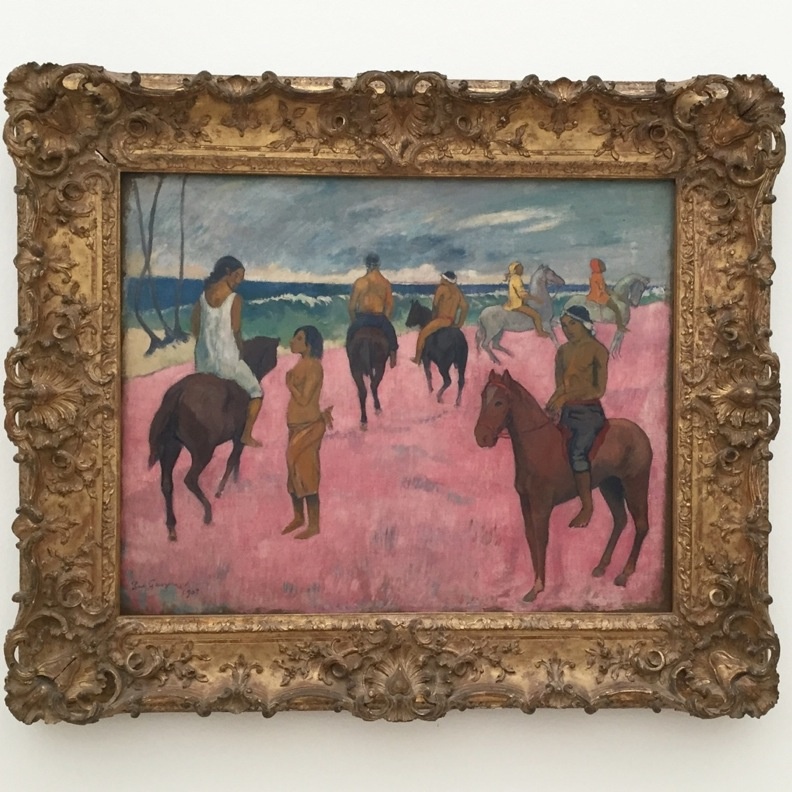 "Riders on the beach II"

At first, art for the stockbroker Paul Gauguin was just a hobby. His creativity was strongly influenced by the famous impressionist artist Kamil Pissarro who became his friend and mentor. It was Pissarro who helped Gauguin organize his first exhibition. Soon painting absorbed Gauguin entirely, and he abandons his bank work in 1883.

One day, Gauguin sees sculptures of eastern people at a huge exhibition in 1889 in Paris. It occurs to him to go to the paradise islands. There, the artist thinks, he could simply live and create, without caring for money. There it is a place of primeval purity, beautiful nature and absolute freedom of social conventions. A place of ancient philosophy and wisdom of primitive peoples living in harmony with themselves and the world. Paul Gauguin elects Tahiti. 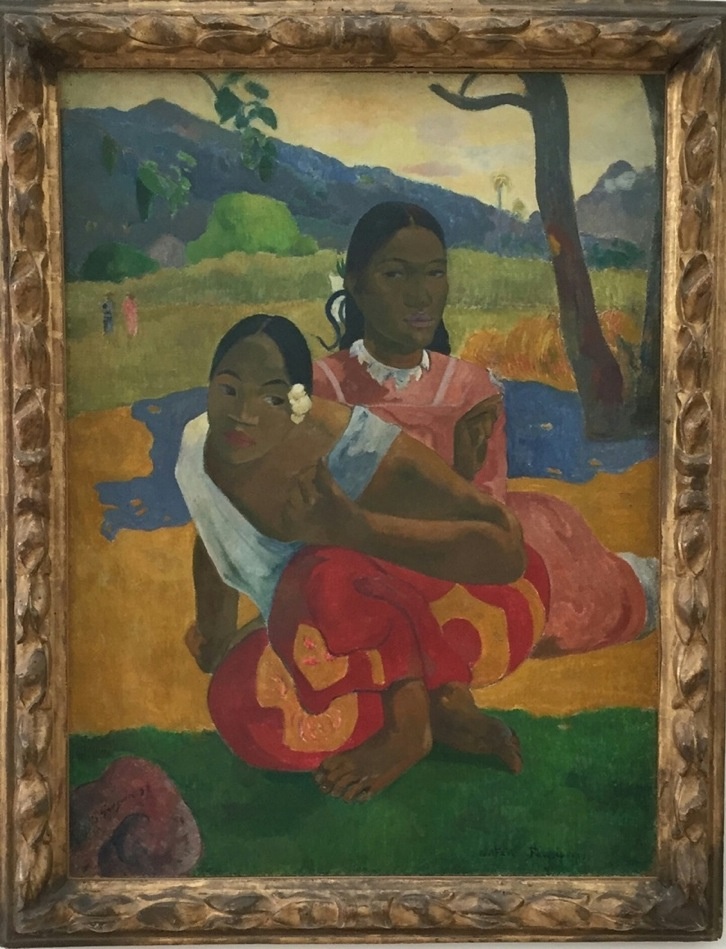 "When will you marry?"

1891. Leaving his wife and children, the legendary artist Paul Gauguin leaves on a journey to the other end of the world in search of primitive life and paradise lost. But disappointment awaits him here: the European civilization had already managed to affect the Tahitian way of life. On the island, Gauguin finds the same Europeans with distinct traits of colonial snobbery. Having quarreled with the local administration, the artist ends up on the verge of poverty.

He lodges in a bamboo hut and soon takes to wife a fourteen-year-old Tahitian by the name of Tehura. The young girl who knew legends of her people well became for the artist an irreplaceable companion, model and assistant. Tehura told Gauguin a beautiful legend about the origin of the best half of the Areoi people. Once the terrible god Oro fell in love with the girl Vairumati. He started a clan of privileged people with her. The legend enchanted Gauguin so much that he wrote one of his best pictures "Her Name Is Vairumati", based on it. In his art, the painter uses ancient Tahitian stories and graphic devices of the eastern nationalities. His pictures resemble rock paintings where spirits and gods exist next to people, and the world is full of secrets and riddles.

But life on the island was anything but paradise. Gauguin suffers from poverty, hunger and diseases. Frequent and random intimate contacts caused a severe infection. 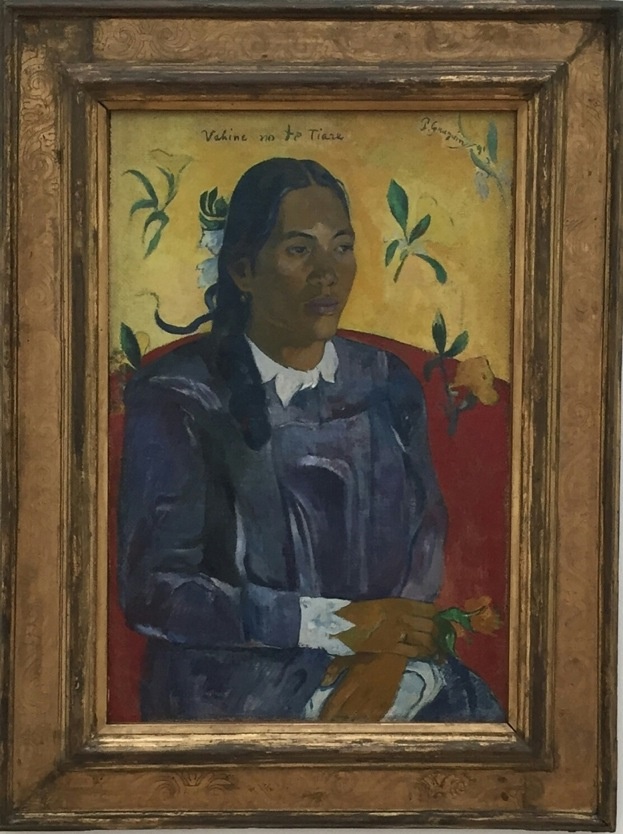 "Woman with a flower"

After a while he decides that it was time to show his work in Paris. The artist takes his pictures there, exhibits them in his homeland and fails completely. The works are pulled to pieces.

Then Paul Gauguin, despite the admonitions of friends, returns to the islands. His illness becomes aggravated again. People are afraid to approach his hut thinking that he is infected with leprosy. At the same time, the artist learns about the death of his daughter. This news deals a crushing blow.

In between pain attacks, during the most tragic period of his life, Paul Gauguin paints his legendary masterpiece "Where Do We Come From? What Are We? Where Are We Going?"

The genius considers this his cultural testament. The picture embodies the artist’s musings about the secret of the origin and future of man. The painting should be "read" right to left, gradually learning the flow and sense of human life - from birth to death. Every image in the picture is a symbol intended to lift, at least slightly, the veil on the universal secret of life. 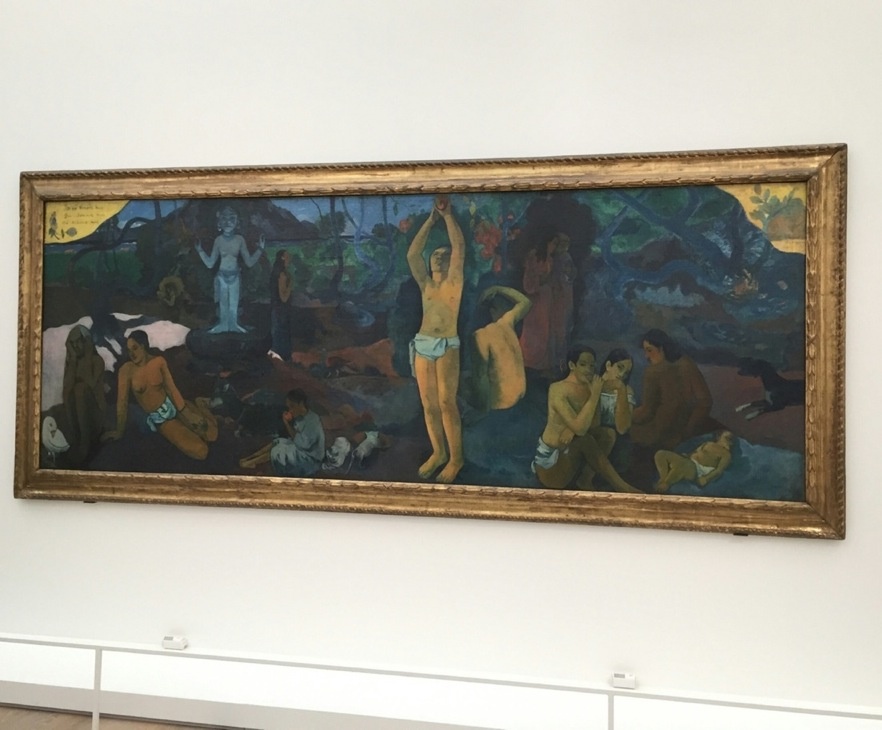 "Where Do We Come From? What Are We? Where Are We Going?"

Having created the picture, the artist takes a lethal dose of arsenic.

However, fate decides that it is still early for the genius to leave. Paul Gauguin survives, his illness passes. The artist decides to build a big comfortable house, takes a loan and gets a job as an     official.

Then, the bad streak suddenly ends. The artist receives a large, at that time, amount of money - 1000 francs – unexpectedly from Paris. He is realized as a journalist and gains considerable income from his state service. But journalist work had virtually kept him away from the canvas for two years.

Soon Paul Gauguin meets one of the key people in his life - the art dealer Ambroise Vollard. Vollard actively sells the artist's pictures, supplies him with necessary materials and pays him 300 francs every month. 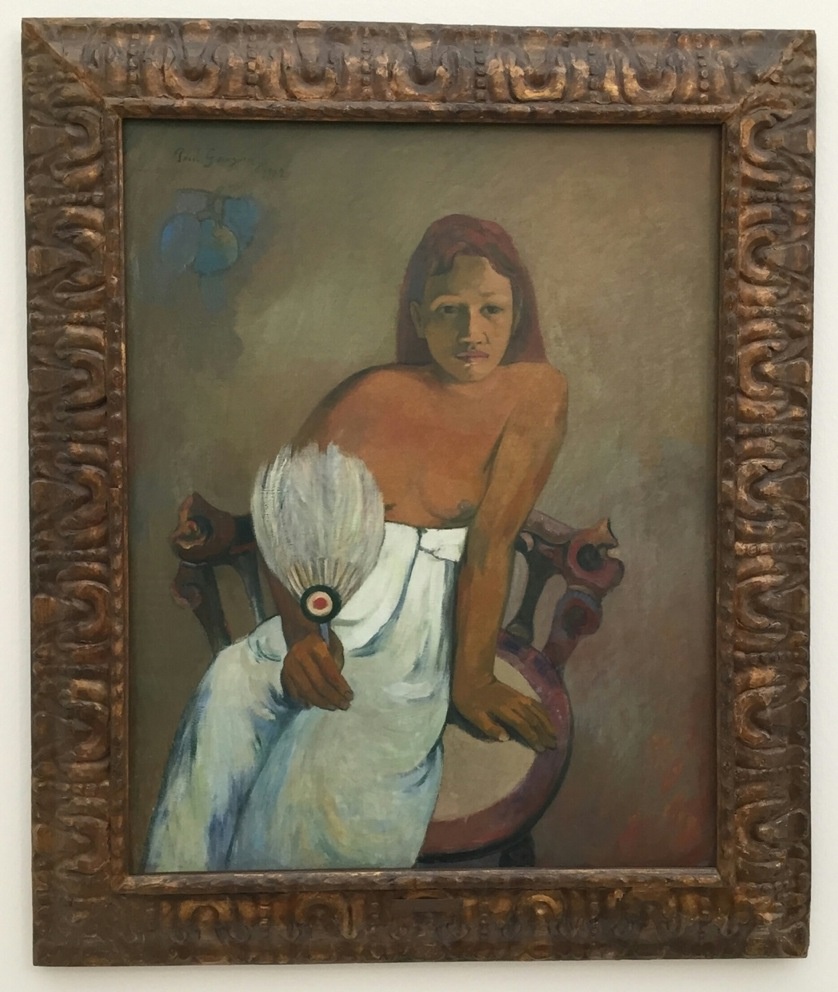 "Young girl with a fan"

Now that he has the means required, Paul Gauguin realizes one more dream of his and goes to the Marquesas Islands. Here Koke - such was the artist's nickname - builds The House of Pleasure.

But the troubles, which appeared long gone, assail the genius again. Gauguin is involved in political intrigues, his illness starts progressing again. In April 1903, Gauguin protested against improper treatment of natives, which resulted in his being sentenced to 3 months of prison. Another month later, the artist died of acute cardiac failure.

In spite of all the vicissitudes of life, faith in his own talent and mission never abandoned Paul Gauguin. This indestructible conviction enabled the artist to cope with difficulties. Paul Gauguin, rejected in his lifetime, gained a full and unconditional recognition after death. 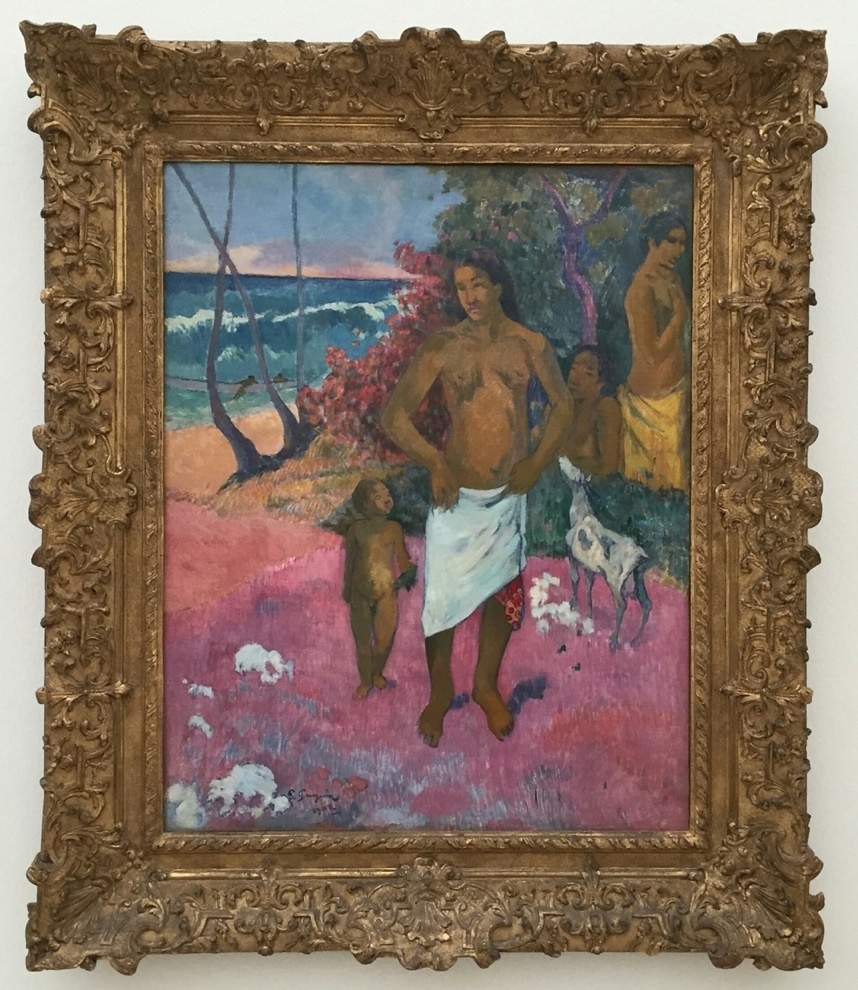 So now, everyone at the exhibition in Fondation Beyeler can familiarize themselves with the master’s legendary artworks. The exposition surprises you not only by its masterpieces, but also by the advanced technologies it boasts. For example, the interactive book, where pictures of the artist’s life and work replace one another, transfers you to Paul Gauguin's world as if by magic. And in one of the exposition’s rooms, the artist’s relocations around the globe are projected onto the wall. Such technical aids make the exhibition even more spectacular and atmospheric.