And How Is It Different From Other Contemporary Art Fairs? 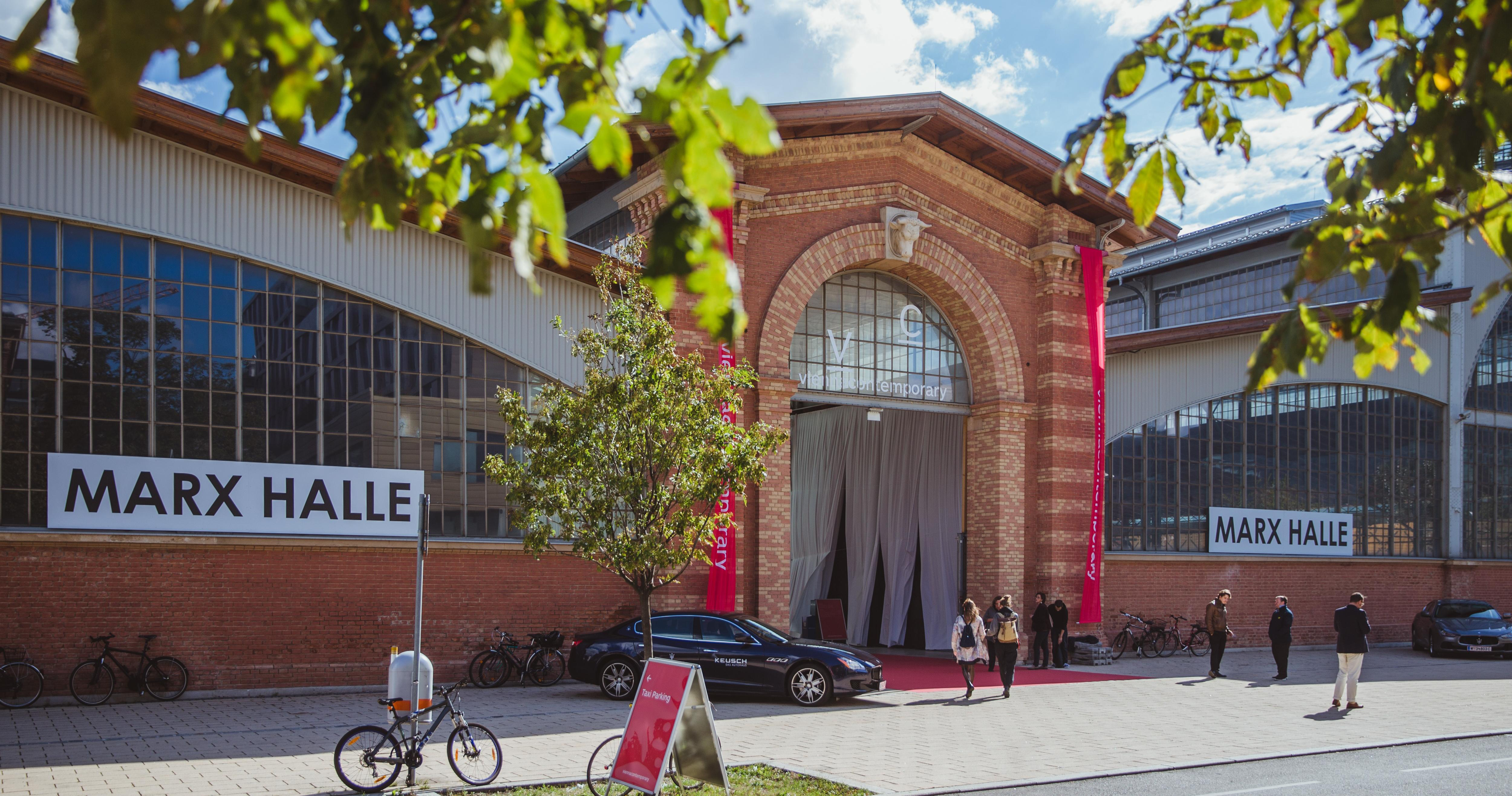 This year’s program of viennacontemporary includes more than 400 artists representing 118 galleries from 27 countries. The 2018 program is really rich, and the array of events selected by the fair’s organizers is guaranteed to offer something of interest to every art connoisseur. For example, the main program of viennacontemporary includes 10 sections, 5 special presentations, discussions with art professionals (on the topics ranging from effective strategies for beginner art collectors to reflections on art activism in the times of political and social changes), a family program and highlight tours of the entire fair. The main program is supplemented by multiple cultural and art events. Therefore, it comes as no surprise that this year’s viennacontemporary saw approximately 30,000 visitors.

This year marked the first time Voloshyn Gallery participated in viennacontemporary; it was the only gallery to represent Ukraine at the fair. Voloshyn Gallery presented the works of four Ukrainian artists: Zhanna Kadyrova, Anastasiia Podervianska, Lesia Khomenko and Mikhailo Deyak, as well as the German artist of Ukrainian origins Maria Sulymenko. 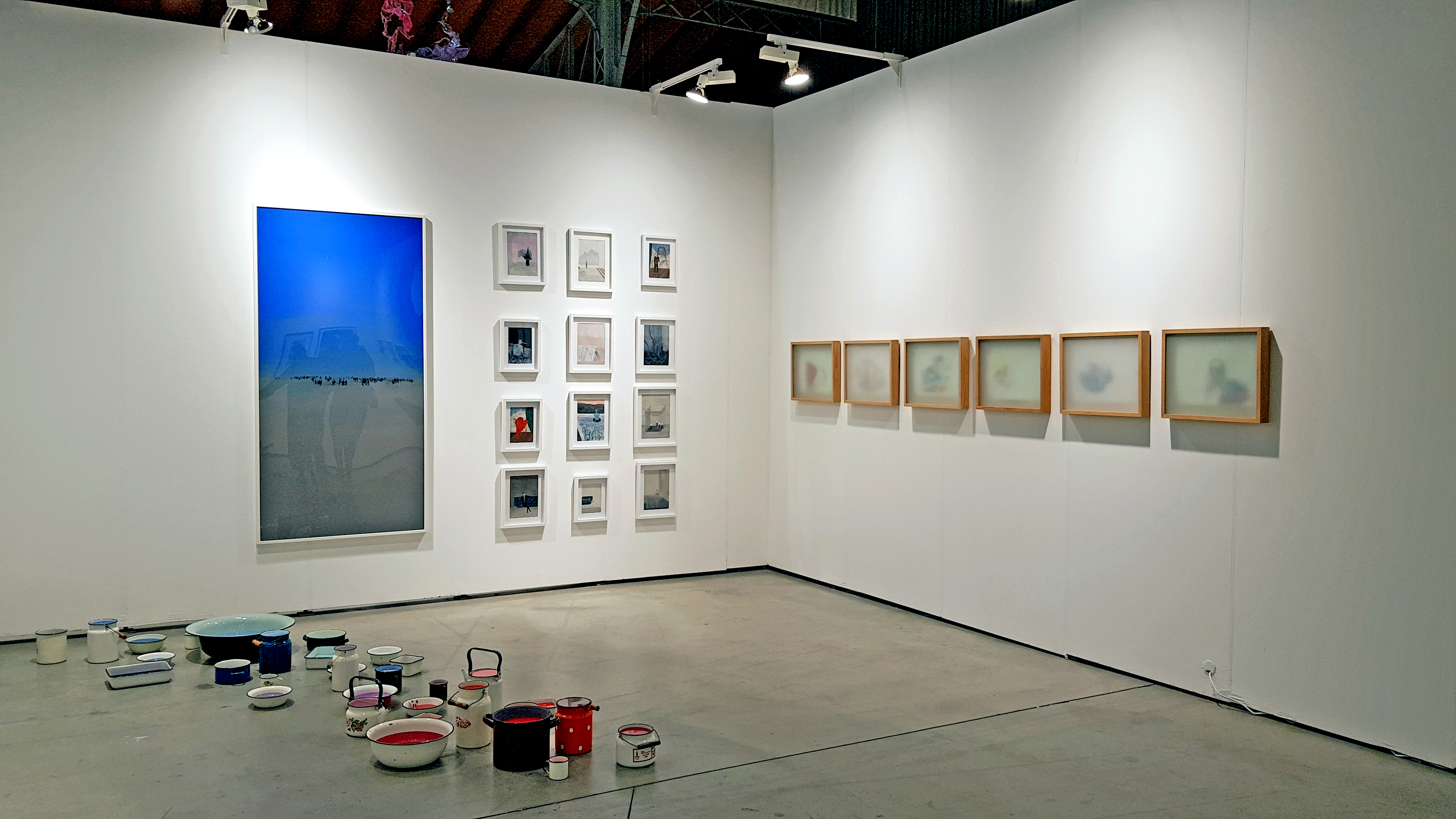 Maria Sulymenko’s oeuvre was represented by watercolors of The Glass World of People and Things series, Mikhailo Deyak was represented by a new work of the Space series, Lesia Khomenko presented the series After the End. Voloshyn Gallery booth also featured a textile work Viper by Anastasiia Podervianska (of the Country Horror series). 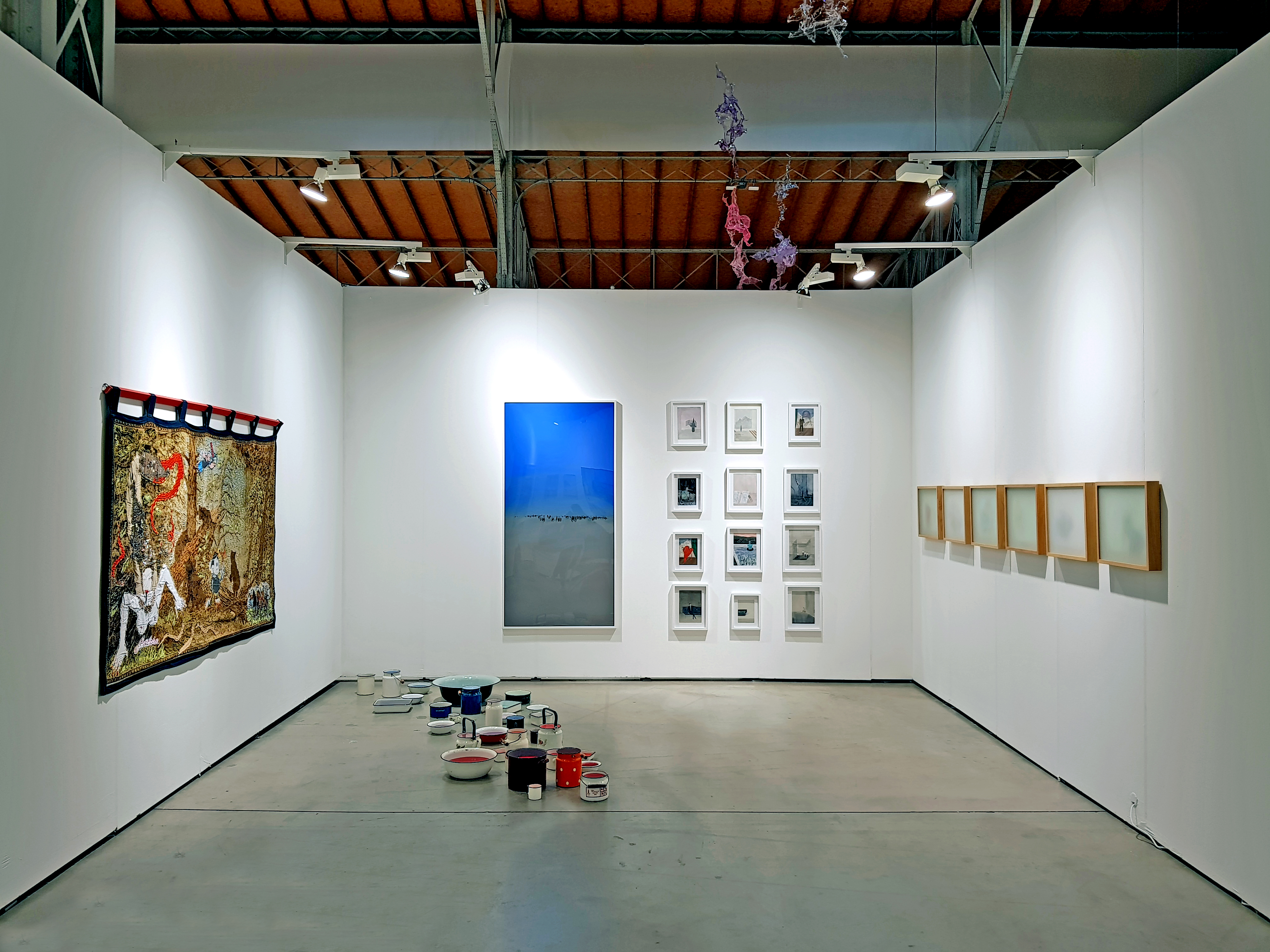 We would like to draw attention to the interactive part of the Voloshyn Gallery exposition: the installation from the series Filling (2018) by Zhanna Kadyrova. The artist is using her signature material, tiles, to fill the vessels traditionally used for storing liquids. The artist cuts up layers of colored tiles to the diameter of multiple enameled vessels. Seen from the side, the glistening tiles look like the shining surface of paint seemingly filling the vessels. 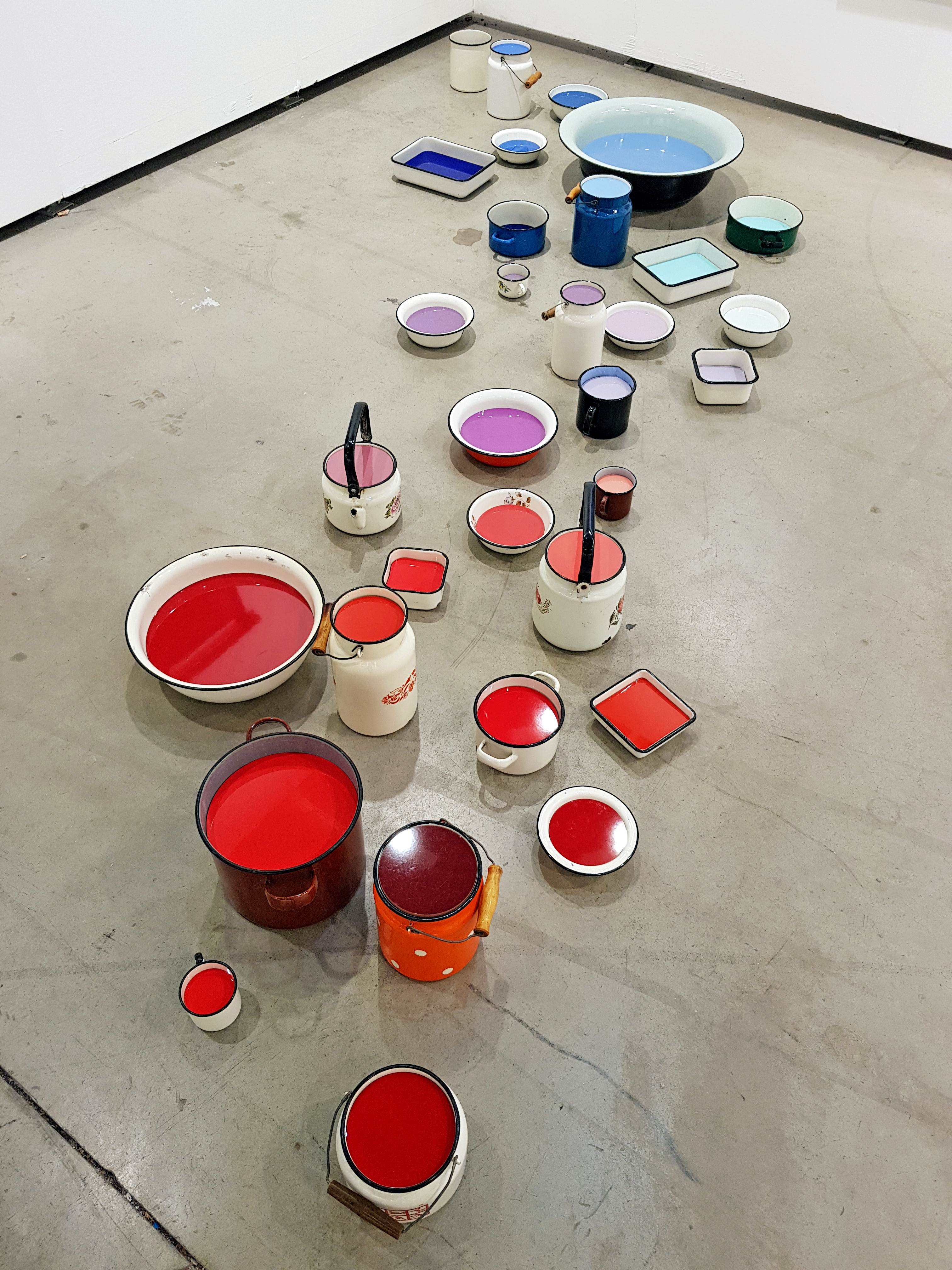 Voloshyn Gallery was not the only institution to represent Ukrainian artists at this year’s viennacontemporary though. For example, the Telekom Art Collection, specializing in contemporary Eastern and South-Eastern European art, featured the works of the Ukrainian artist Maria Kulikovska. Telekom Art Collection presented a collective program of four artists, Aneta Grzeszykowska (Poland), Šejla Kameric (Bosnia and Herzegovina), Sanja Ivekovic (Croatia) and the abovementioned Maria Kulikovska, exploring the topic of self-representation and the formation of a feminine image in society. Maria Kulikovska also held a performance on one of the fair’s evenings. 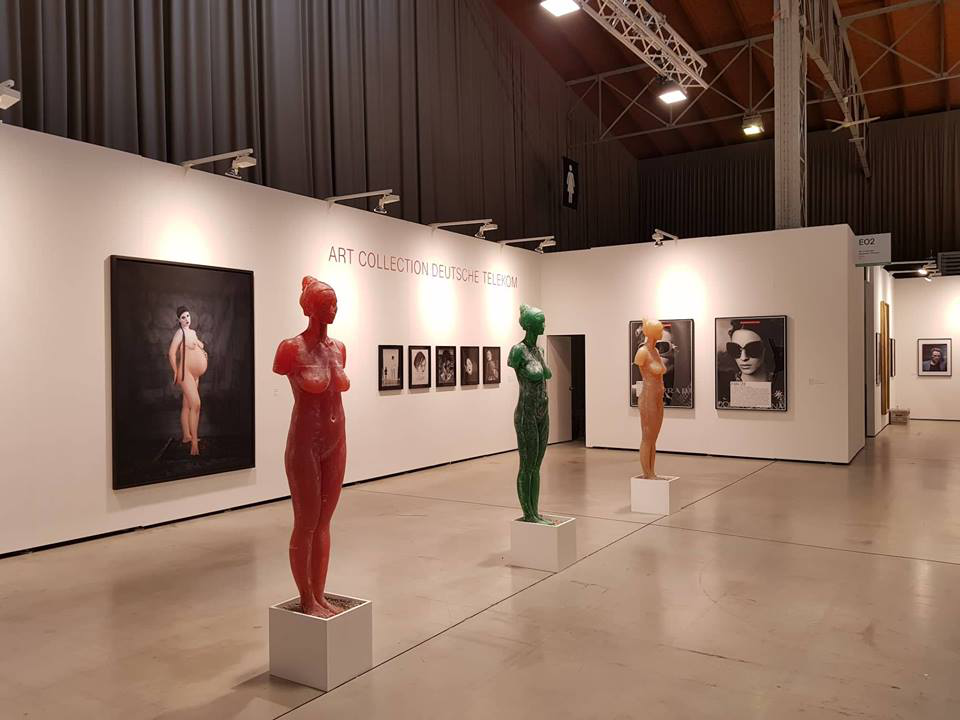 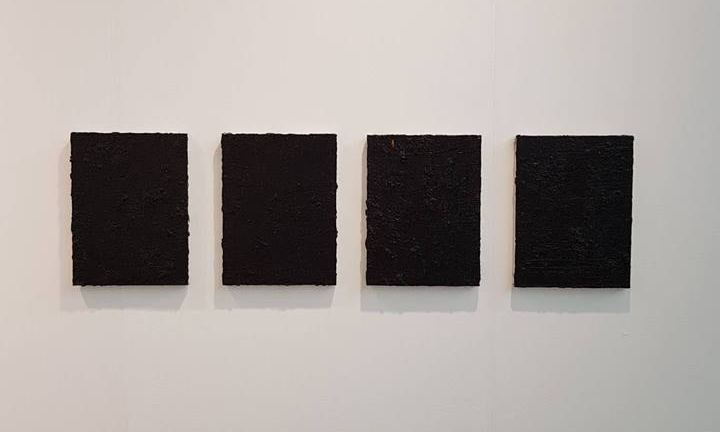 Speaking of the organizational level of viennacontemporary, we should note the thoroughness of the curatorial team in selecting the projects and organizing the exhibition space. Participants worthy of particular attention include Thaddaeus Ropac Gallery (the gallery with locations in London, Paris and Salzburg), which presented the projects of very strong and acclaimed artists. We would like to mention the sculpture Castor & Pollux by a British artist Tony Cragg (Turner Prize ’88). Tony Cragg, rightly acknowledged as a contemporary classical master, is one of the most widely exhibited and commercially successful sculptors. Additionally, Thaddaeus Ropac Gallery presented the painting Untitled (Rose, November 22, 2017) by Robert Longo, the artist who has made a splash at the main program of Art Basel with his large-scale sculpture Death Star II in the Unlimited section. 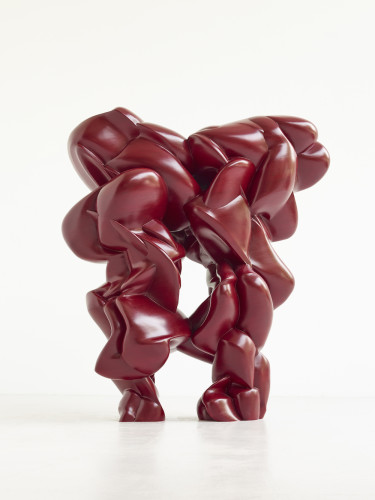 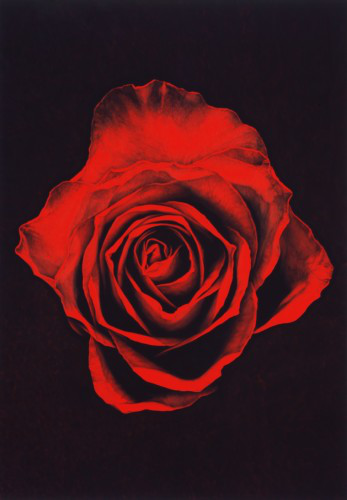 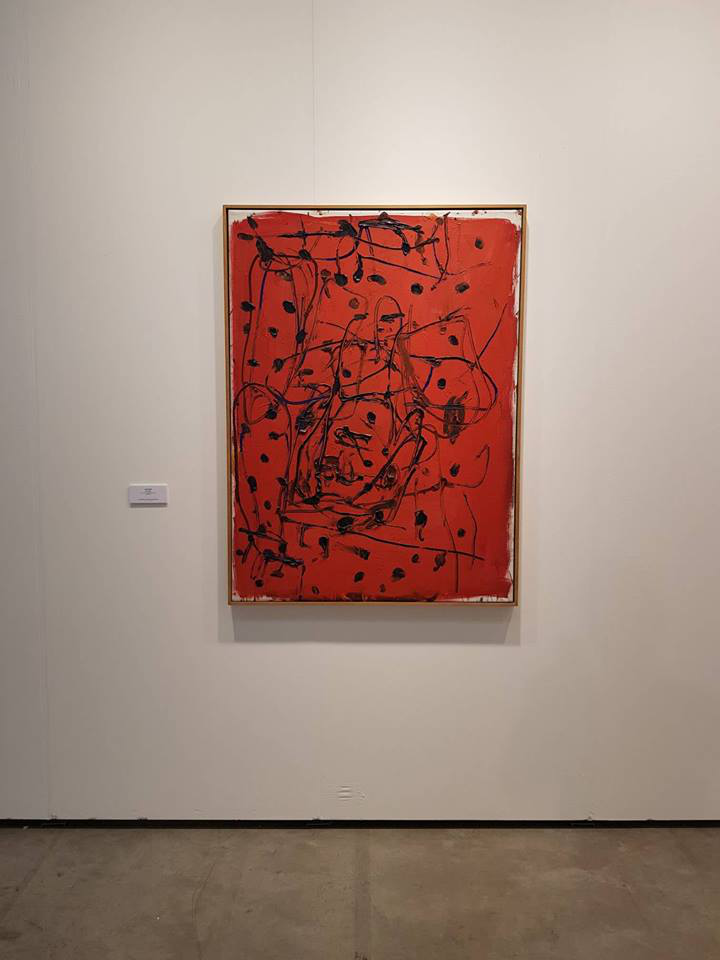 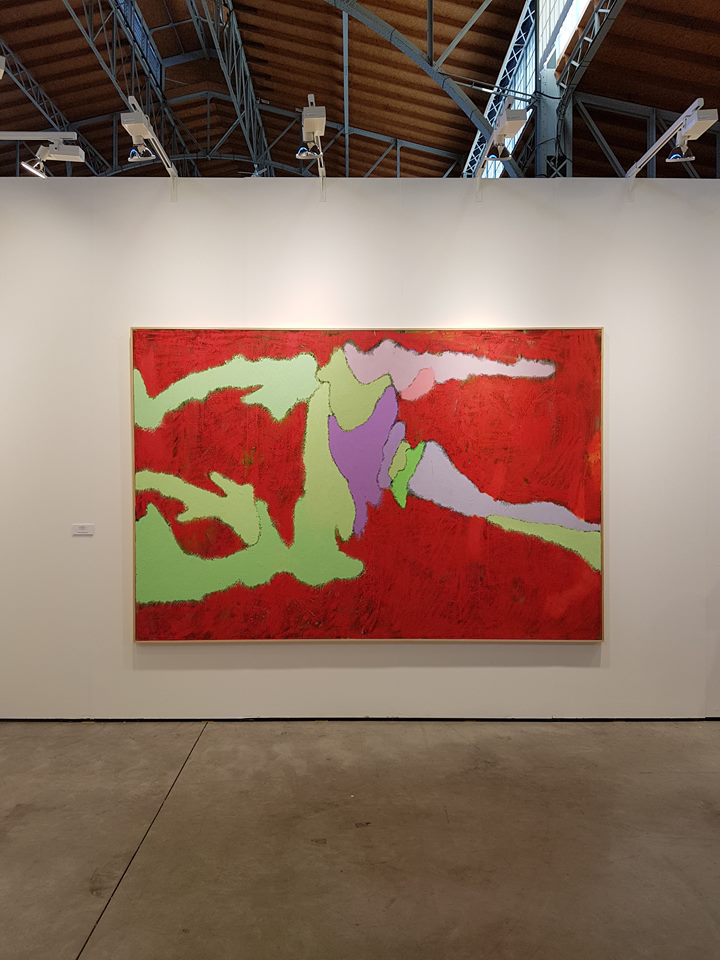 The Beijing-based PIFO Gallery, the only gallery to represent China this year, added diversity to the lineup. The gallery focused exclusively on paintings. The six artists exhibited at PIFO Gallery’s booth included an acclaimed Chinese artist Tan Ping. The choice of works is interesting, given that Tan Ping is best known for his large-format etchings recognizable in their technique of overlaying copper plates. 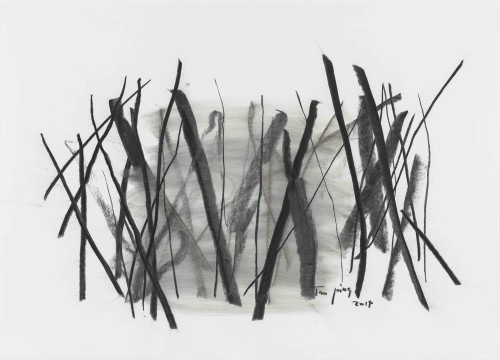 Tan Ping, a work from the Untitled series (2014), PIFO Gallery

Romania was represented by 5 galleries this year. In our opinion, the most interesting project was presented by the Bucharest-based EASTWARDS PROSPECTUS gallery, which managed to put together an overview of a fairly unique Romanian artist Razvan Anton. The artist believes that painting is a “medium beyond media,” allowing him to find resources for new statements in the traditional and seemingly not too relevant art form by adopting various techniques. A collection of Razvan Anton’s works presented by EASTWARDS PROSPECTUS gallery illustrated this original perspective. 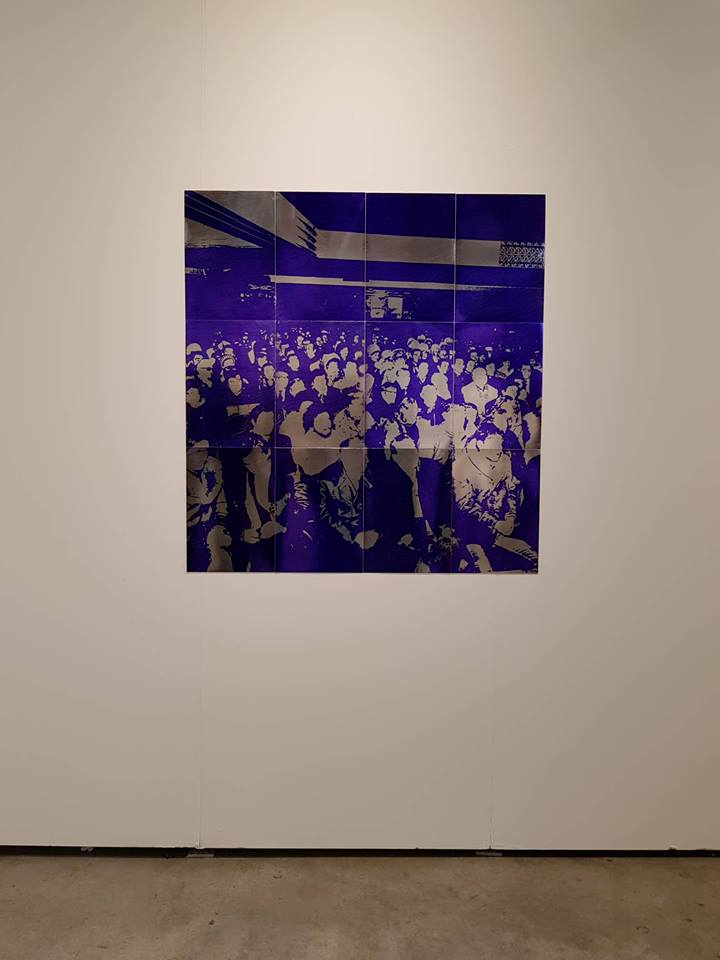 The Belgian gallery Geukens & De Vil is not to be overlooked either. Its booth introduced the viewers to the new works of the famous Belgian sculptor Philip Aguirre y Otegui. 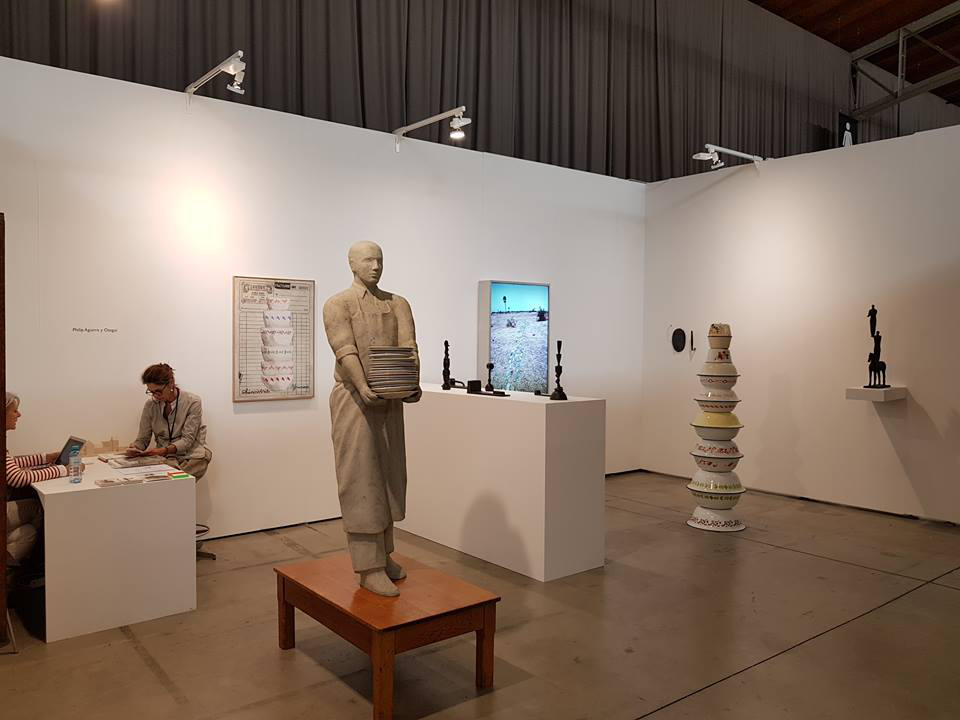 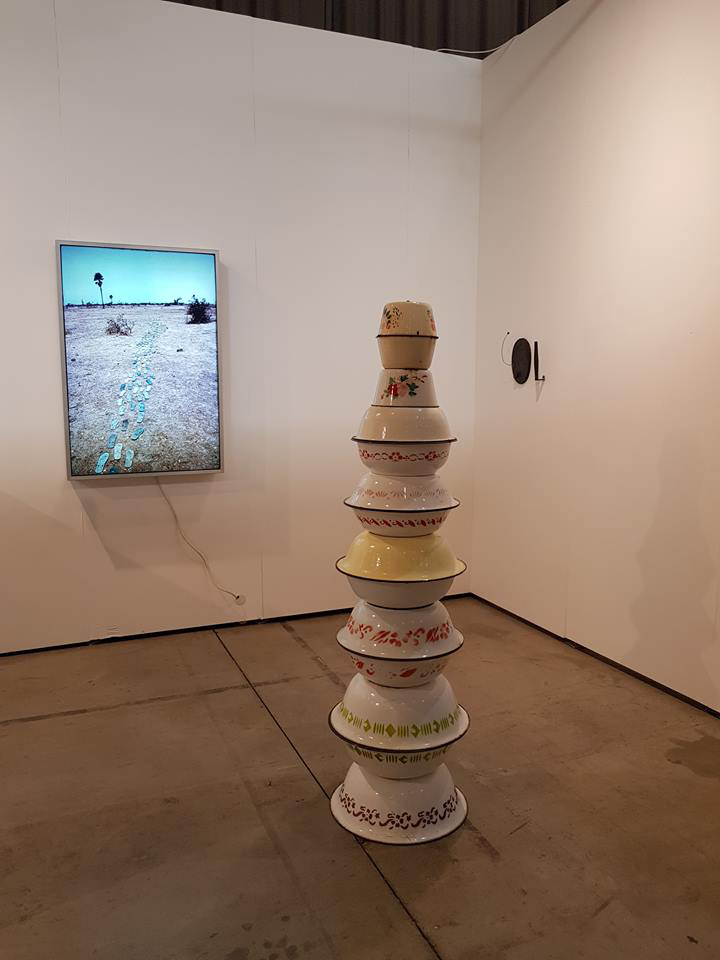 The Torino-based PRIVATEVIEW Gallery stands out thanks to a strong solo project of an American artist Adam Winner, for whom abstract painting is a way to process his spiritual struggles. The rises and falls of psychological tension are visually represented not only by the artist’s sweeping gestures with which the paint maps the canvas but also by imperfections of the surface and materials that the artist makes “markedly visible.” It is no coincidence that one painting of the new project (all works were created in 2018) is entitled Self Portrait. 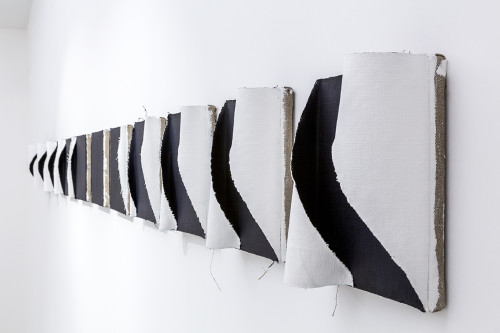 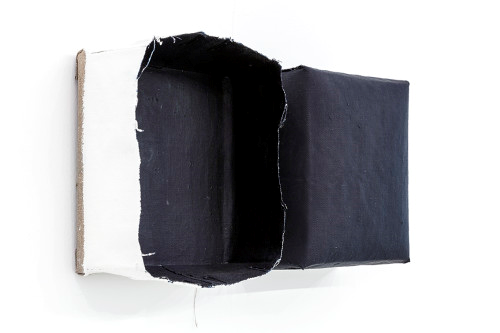 P74 Gallery (Slovenia) stood out in its strong and critical sociopolitical engagement. It presented a duo of Uroš Potocnik and the Laibach Kunst group, a collective of artists working in various media established in the 1980s. 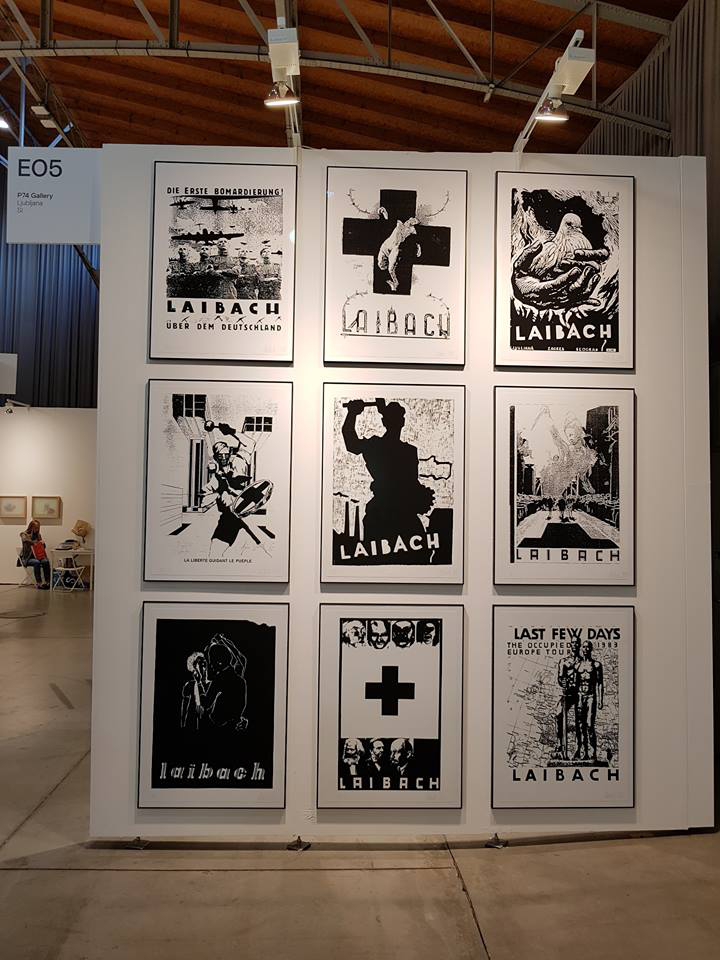 Laibach Kunst, a series of posters from 2017, P74 Gallery

VILTIN Gallery (Hungary), which presented the sculpture Pause by Gyorgy Gaspar, is well worth a mention too. The artist works in glass, enshrining the principles of geometric abstraction in his objects. His manner was influenced by the Italian sculptor Arnaldo Pomodoro, an influence Gyorgy Gaspar readily acknowledges. 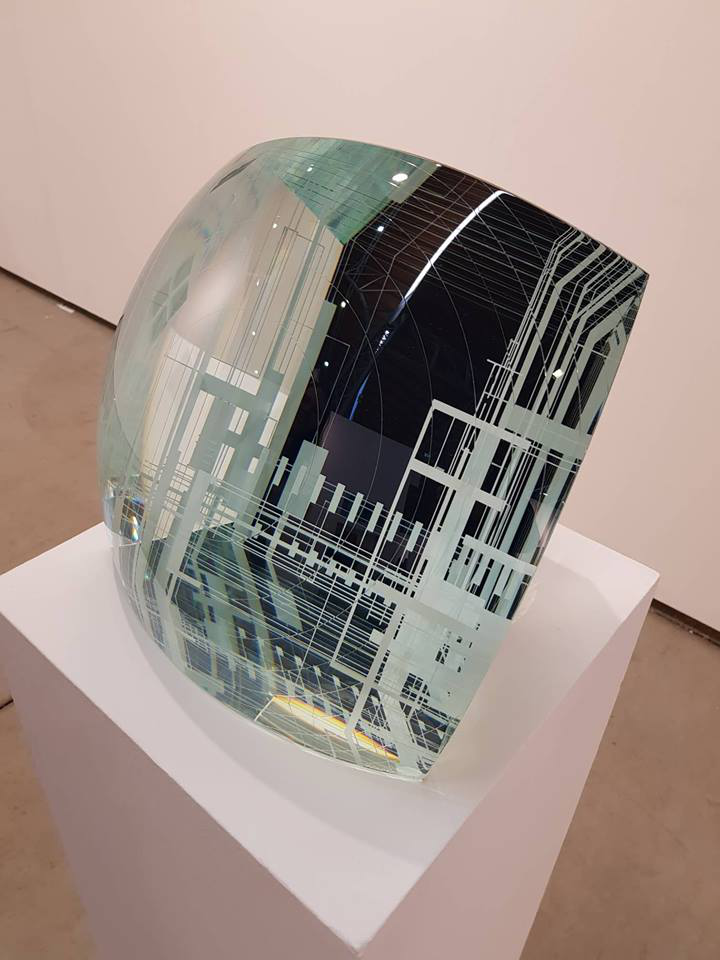 SARIEV Contemporary, the only Bulgarian gallery at this year’s viennacontemporary, dedicated their booth to the works of Luchezar Boyadjiev, an artist whose influence on the formation of the contemporary Bulgarian art scene cannot be overestimated. His strongly socially and critically engaged experiments in various media lay the foundations for the new generation of Bulgarian conceptualist artists. 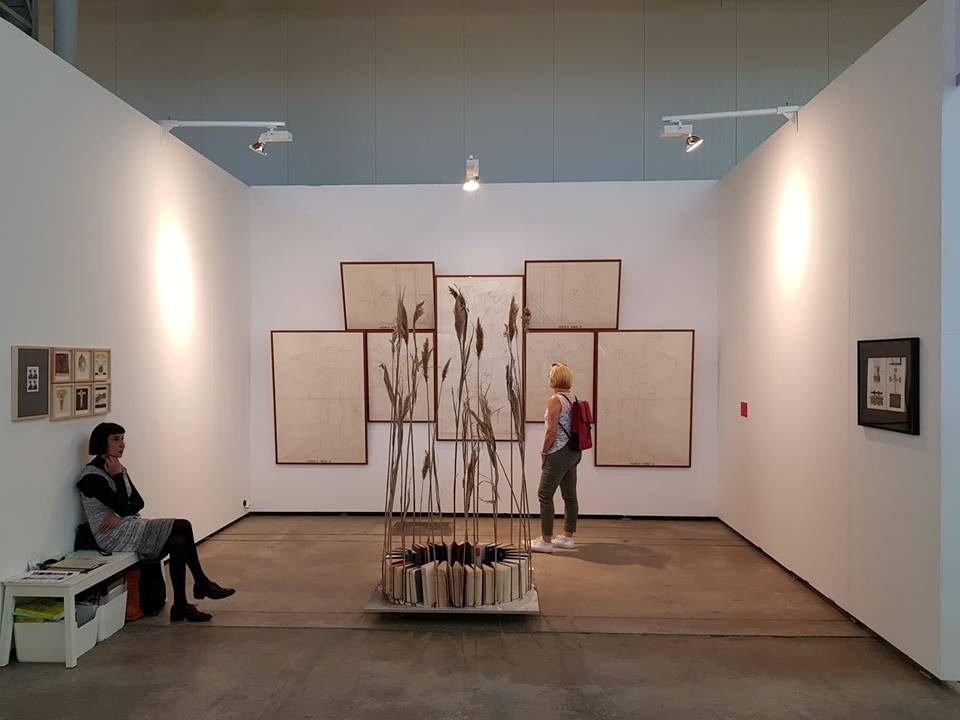 The SARIEV Contemporary Gallery booth
The general view of the exposition

It comes as no surprise that the majority of galleries participating in viennacontemporary, or 43, too be more precise, are Austria-based. Active participation of local galleries also demonstrates the high level of the Austrian art market: the projects they presented did not strike the viewers as homogenous, and were prepared at a high professional level. For example, the Vienna-based Galerie Crone is worth a mention: it managed to shape a project of eight artists working in various media (Peter Miller in photography, Clemens Krauss in painting, Rudolf Polanszky in sculpture, etc.) into a cohesive statement. 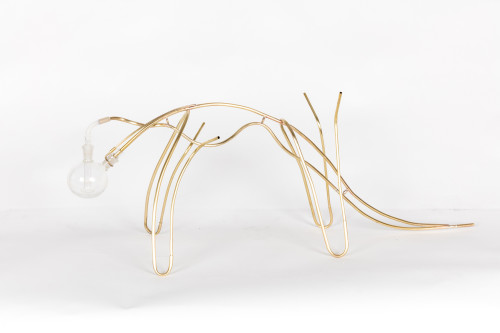 The Vienna-based Zeller van Almsick gallery, presenting a solo project of the young Austrian artist Charlotte Klobassa, sticks in memory thanks to the unconventional appearance of its booth. 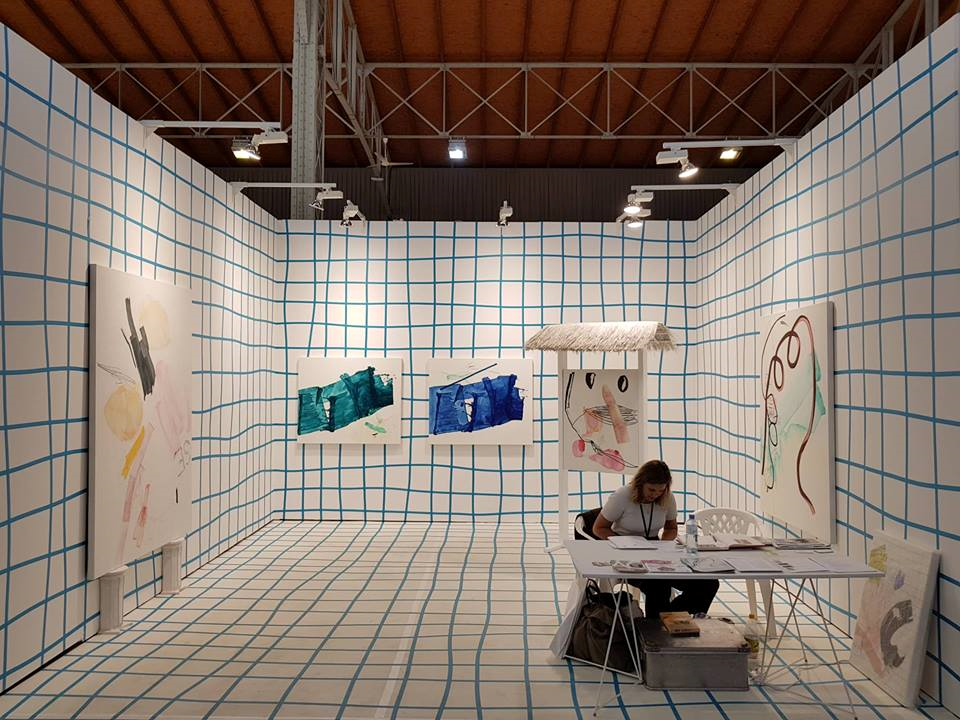 Obviously, Krinzinger Gallery should not be left unmentioned. One of the oldest galleries in Vienna, it presented approximately 40 artists to the visitors of viennacontemporary. The gallery’s booth featured a photograph by one of the most influential contemporary Belgian sculptors, Hans Op de Beeck; a photograph of the Serbian artist Marina Abramovic, best known as a performer; paintings of the controversial German artist Jonathan Meese, known for his interest in occult themes, and many other artists. 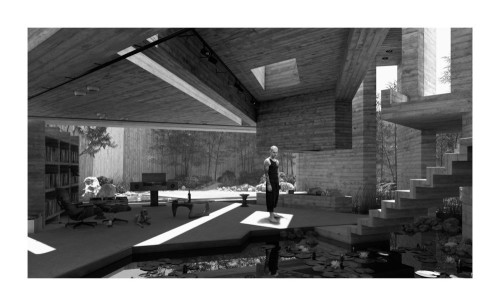 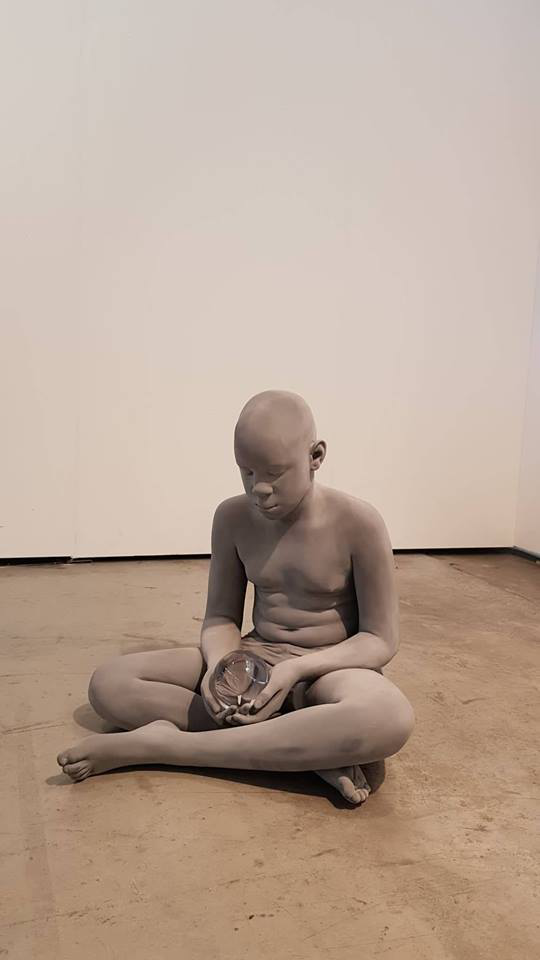 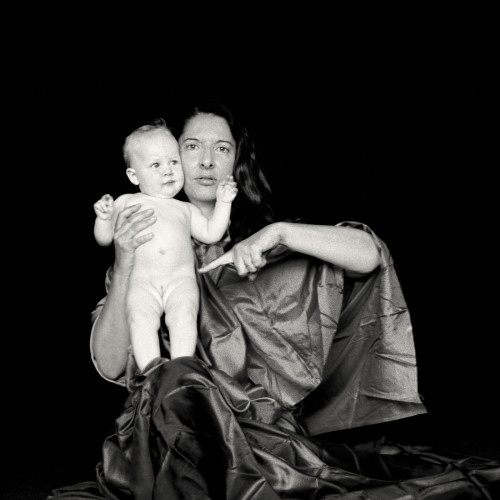 viennacontemporary is a unique phenomenon on the global art scene because it fosters the formation of an art market in the Eastern and Central European regions (still relatively ill-represented at international art fairs) and supports young institutions and galleries. “Vienna itself is already in the east. If you look at the galleries, most of them have been exhibiting eastern European artists. The same goes for museums like the Mumok,” says Christina Steinbrecher-Pfandt, who has been artistic director of the fair since 2012. The east is not just one region but has many faces. viennacontemporary’s organizers seek to highlight and demonstrate this diversity.

Given that the fair’s organizers have finalized the viennacontemporary dates for several years in advance after the change in location (the move to Marx Halle), we can confidently expect an increase both in the activity of galleries of our region, and the quality of their projects.