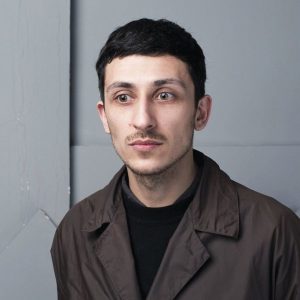 Yevgen Samborsky was born in 1984 in Ivano-Frankivsk. He graduated from the Vasyl Stefanyk National Precarpathian University in 2005. He held the Gaude Polonia Program fellowship in 2009 and 2012. He studied under the Polish artist Pawel Althamer in 2009-2012. He received the 2012 MUHi Prize, the 2013 First Special Prize of the PinchukArtCentre Award (as part of the Open Group). He is the winner of the 2017 Open Call for Young Ukrainian Artists organized by Dymchuk Gallery, and was a 2018 PinchukArtCentre Prize nominee. He was the curator of the Ivano-Frankivsk Artists’ Residency in 2015, and of the Porto Franko International Festival of Relevant Art in 2018. He currently lives and works in Kyiv, Ukraine.