Art world has always posed a challenge to a casual observer: with its overabundance of names, projects, events and shows, it might be overwhelming and intimidating to approach without training. For those who would like to develop a better understanding of contemporary art, or already have some background but want to further hone their skill in this uneasy task, we would like to offer a closer look at the program of the 49th Art Basel Fair (Switzerland), the event that has made Basel a capital of contemporary art.

The Unlimited Section of Art Basel’s main program—its most striking part, which we will describe in more detail later—opened on Monday, June 11. The very title, Unlimited, refers to the defining trait of the works exhibited in the section, which focuses on projects that could not be exhibited in a regular booth: giant sculptures, wide-screen videos, oversized installations, and more. All galleries represented in the Unlimited section are participants of the main Art Basel program.

Given that the section was conceived with large scopes in mind, it might be interesting to check what the numbers tell us.

Last year’s Unlimited was seen by approximately 95,000 viewers. As Art Basel’s frequent visitors who’ve been attending the fair’s events for several years now, we can say with confidence that the enthusiasm of art aficionados did not flag a bit this year!

Obviously, each participant engaged with the dizzying magic of numbers in his or her own way. For example, the Chinese artist Ai Weiwei used 3,020 porcelain shards in his installation Tiger, Tiger, Tiger (2015). 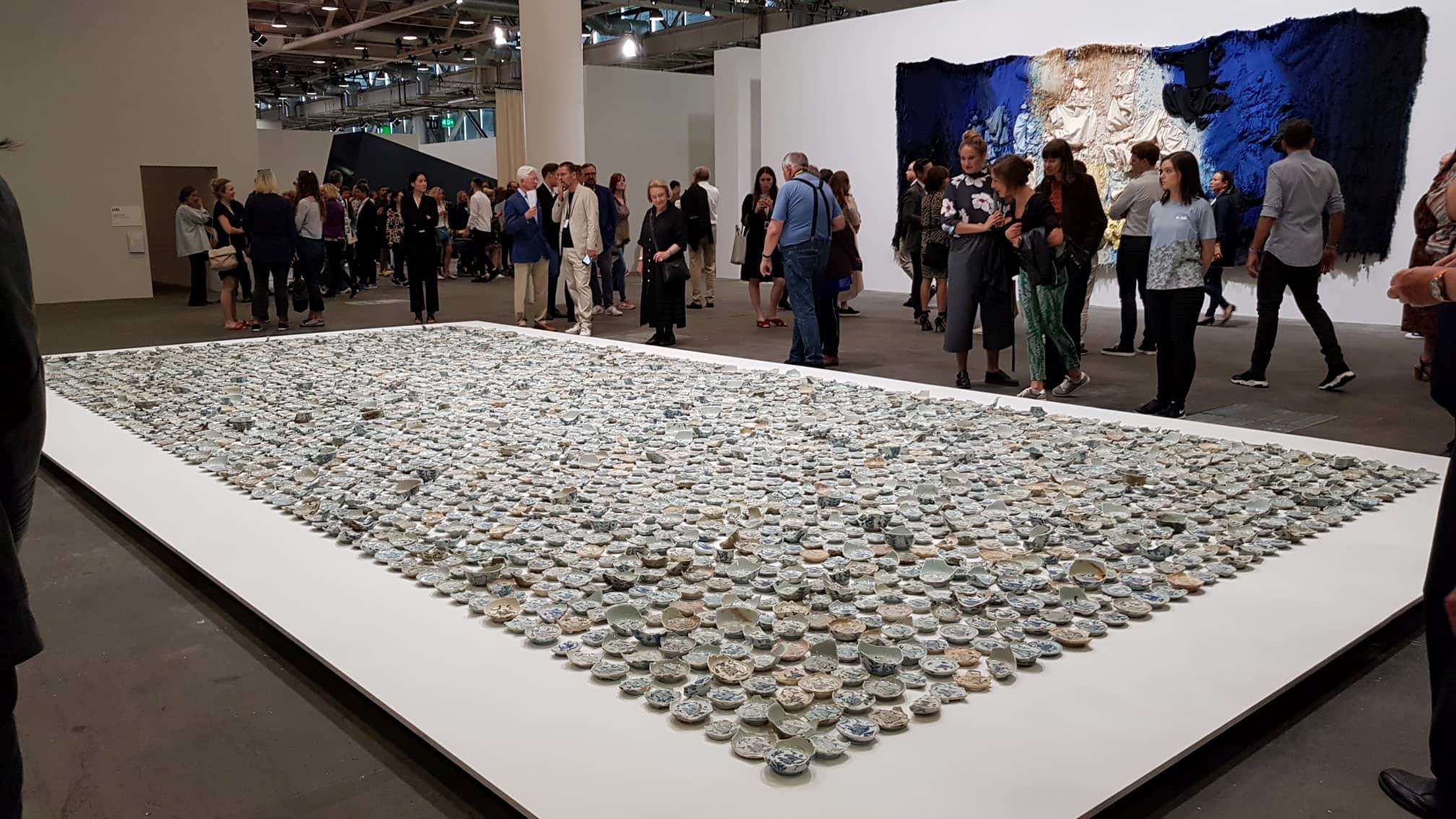 Presented by Lisson Gallery in collaboration with Galerie neugerriemschneider

Andra Ursuta created a hundred sketches of a dead body for her 2017 project The Man From the Internet (2017). The images are based on photographs she found on a website detailing the brutalities of the Russian army during the wars in Chechnya in the 1990s.

Katherine Bernhardt’s painting Blue Skies, 2,128 cm long, was created specifically for Unlimited 2018. The five canvases were installed side-by-side to create a panoramic perspective on contemporary pop culture. Every viewer is bound to find something near and dear to his or her heart during this stunning, 21-meter long quest, be it a can of Coke, a pack of cigarettes, Rubik’s Cubes, Pac-man heads, laptops, ornaments with exotic birds and flowers, and more. 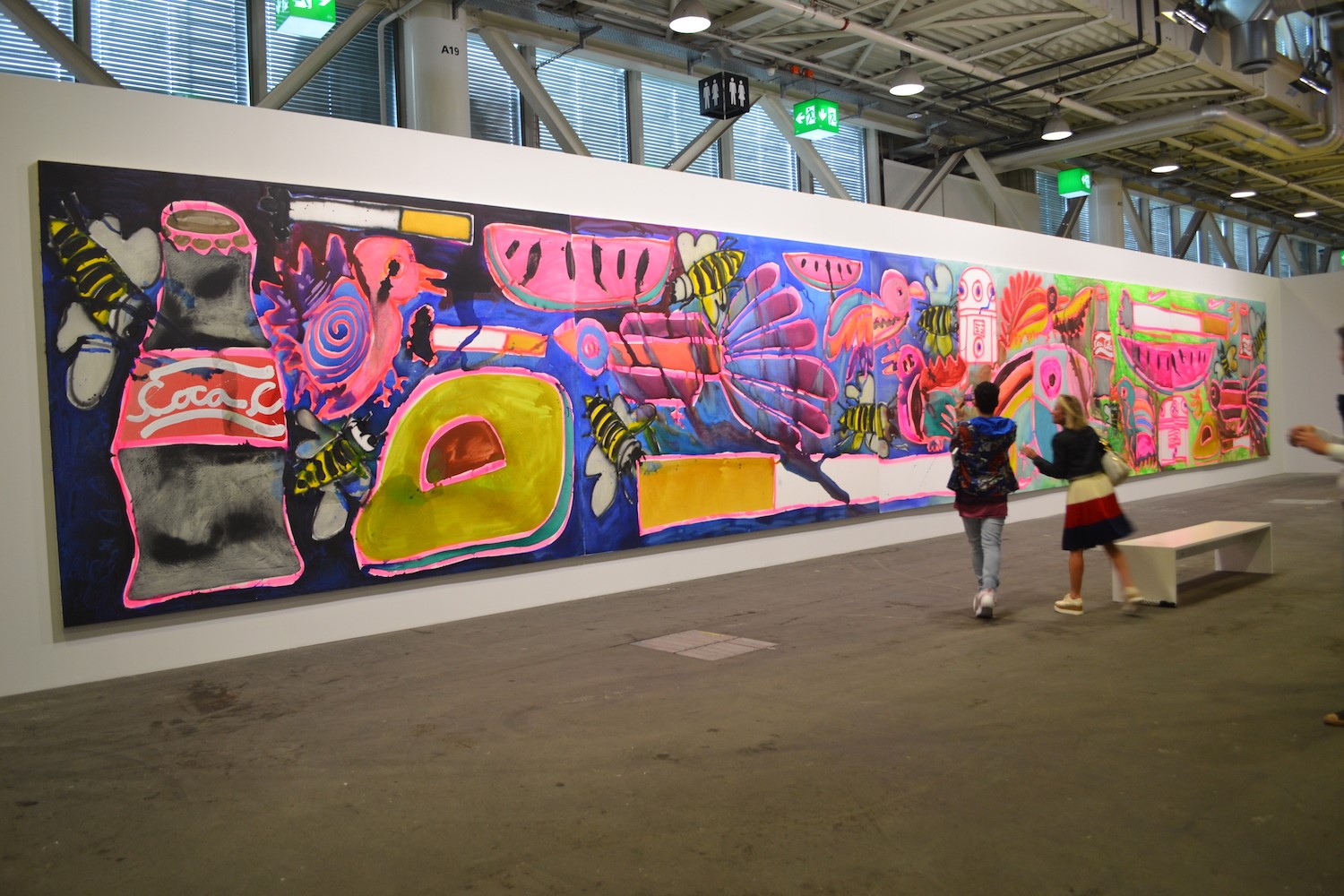 Presented by Canada in collaboration with Xavier Hufkens

The planet-shaped sculpture Death Star II (2017–18) by Robert Longo was one of the most stunning works presented at Unlimited. It is comprised of 40,000 bullets, roughly the number of people killed in gun violence in the USA in a year. The original Death Star (1993) was much smaller, at 18,000 bullets, and was made of blank revolver cartridges. In the updated Death Star  (2018), Longo uses live rounds similar in shape to those used by AK-47. The artist underscored the prevalence of gun violence by enlarging the sculpture and changing the bullet type. 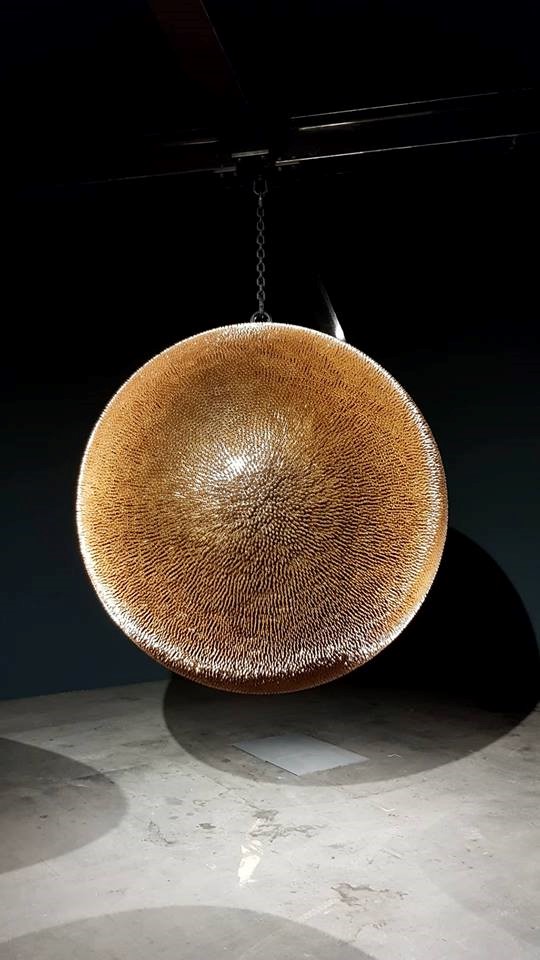 Longo, it seems, has given up on the maximalist credo he espoused as a young artist: «I always imagine that I want to make art that is going to kill you… Whether it’s going to do it visually or physically, I’ll take either way.» This sculpture, after all, raises the issue of human violence and questions the progress of our civilization by visualizing the increase in violent deaths over the last couple of decades, in particular in the artist’s native USA. The work sets out to decrease the levels of violence, with Longo stating that he would donate 20% of funds from the sale of Death Star II (2017–18) to a non-profit founded by the former New York mayor Michael Bloomberg, Everytown for Gun Safety, fighting to reduce gun violence. The artist himself underscores, “This piece is not so much about shock and awe. It’s more about creating some kind of beauty out of something that’s quite horrible, and at the same time hoping that it will make you personally [think], ‘What am I going to do about this [the gun problem]?’”

The pacifist initiative received an enthusiastic response: the work sold for $1.5m to a European museum on the very first day of the early screening.

The work was represented by a New York gallery Metro Pictures in collaboration with Galerie Thaddaeus Ropac. 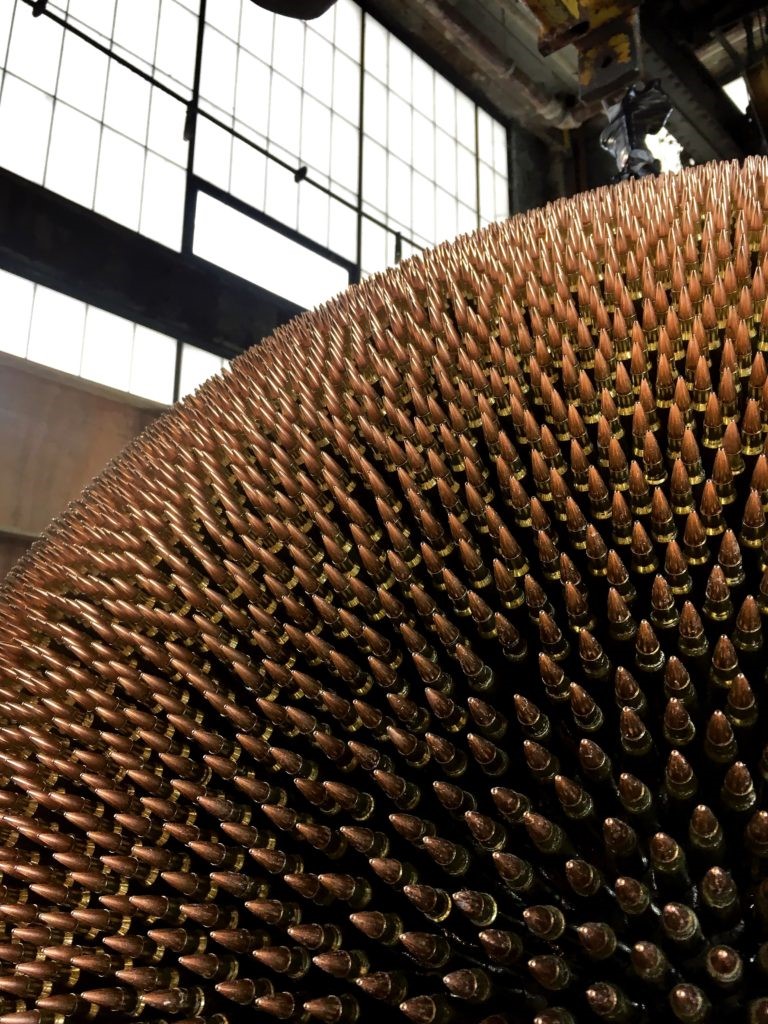 Carol Bove’s installation Egg marked another hit sale for Unlimited: the David Zwirner Gallery placed it with a private US collector for the same price of $1.5m. It is the largest sculptural work to date by the New York-based artist. She sourced the scrap metal for the five-tonne steel Egg from the shipyards, and custom-built a 100-ton press to process it.

All told, Bove is a household name at the iconic contemporary art events around the globe. For example, her sculptural group Léger was displayed at the Swiss Pavilion, tellingly entitled Women of Venice, at the 2017 Venice Biennale, also with the support of the David Zwirner Gallery.

McArthur Binion’s large-scale painting DNA: Transition: Major  (approx. 550 x 240 m), sold by Lehmann Maupin Gallery in conjunction with Massimo De Carlo for $450,000, did not have to wait long for a buyer. The painting belongs to the ongoing DNA series that Binion has been working on since 2013. In this series, the artist uses private documents, including his birth certificate and handwritten pages from an old phone book with names and numbers of his childhood friends. This heterogeneous surface is then covered with a painted grid that both obscures the documentary sources under layers of paint and brings in an element of narrative order. Archival sources cannot be read unless you walk right up to the painting, whereas when you try to take in the entire canvas, you see nothing but a giant grid ornament, an obvious homage to Modernist masters. 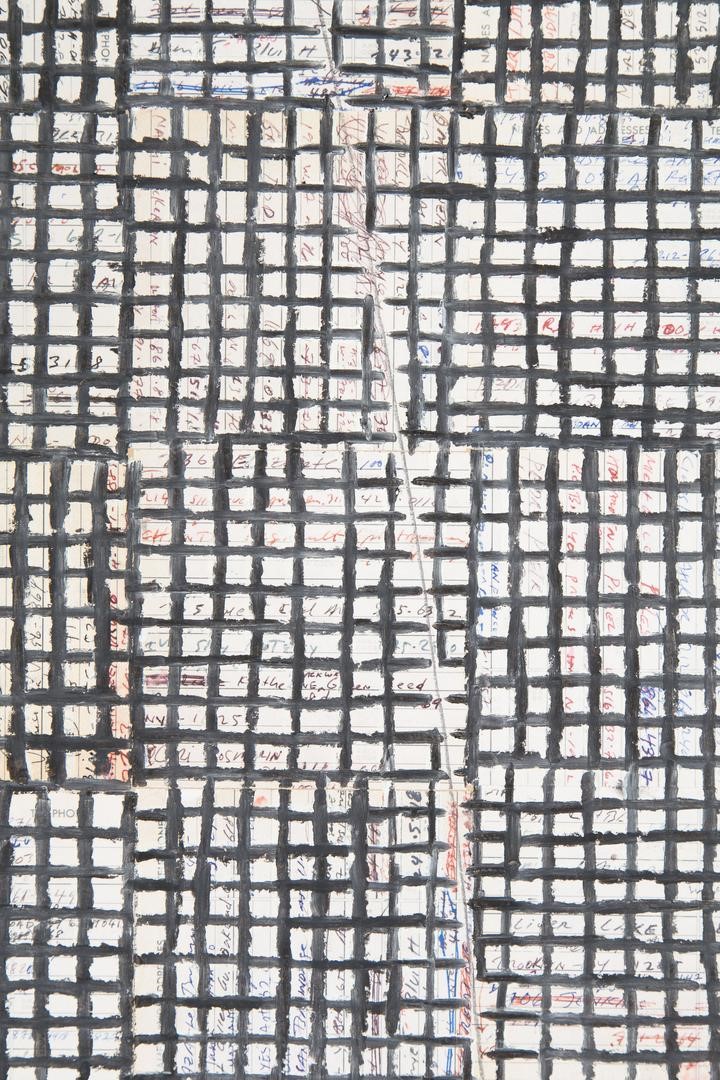 Untitled by the Chinese artist He Xiangyu (2018), presented at Art Basel by the Beijing-based gallery White Space Beijing, is also worth a mention. Much like Death Star II, it stood out with its social and critical fervor. 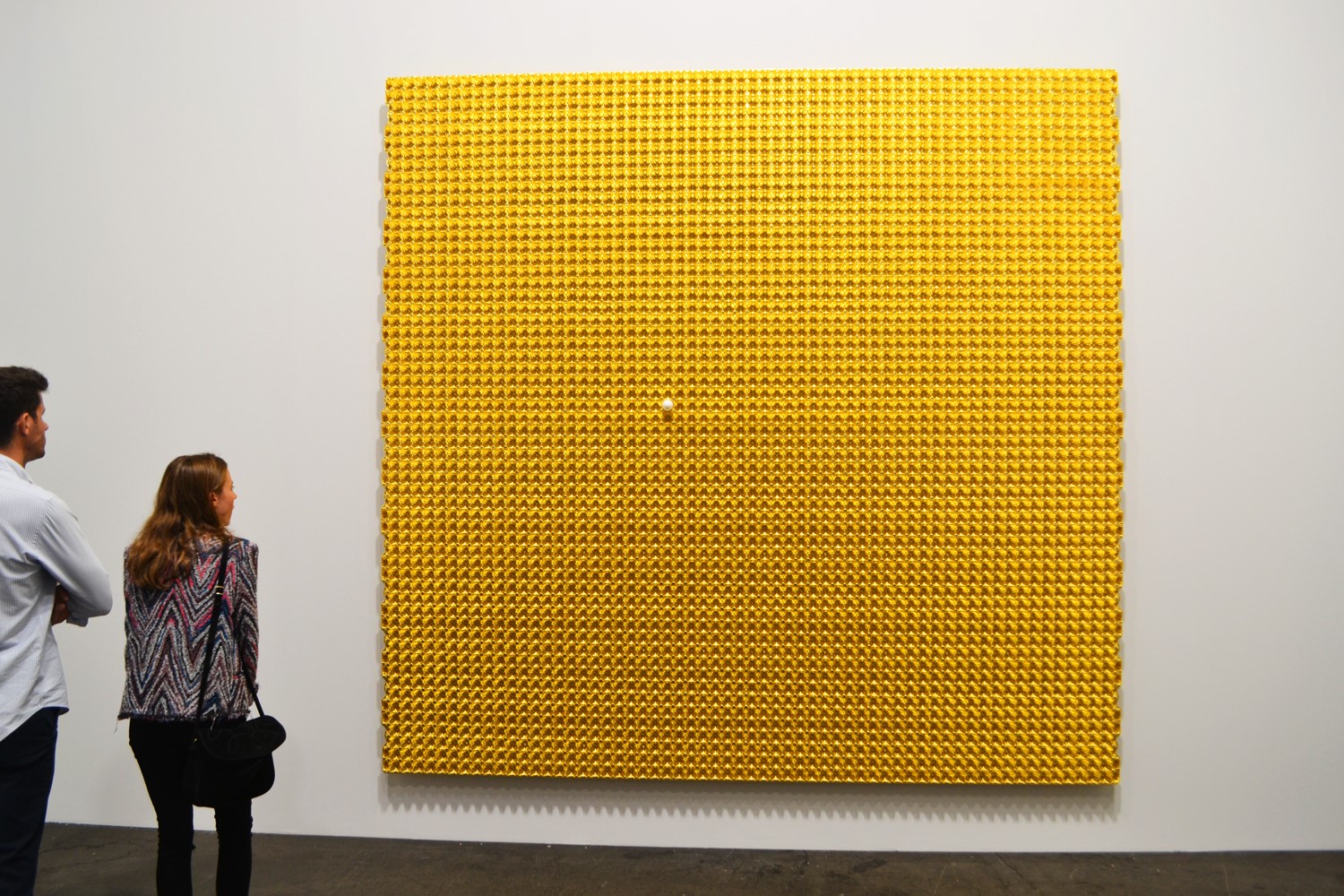 He Xiangyu offers a striking metaphor for the social dimension of the notorious Chinese one-child policy, implemented to bring the demographic situation under strict government control (1979-2015). On a wall, we see three small photographs of a boy, with a pencil line above each picture. The boy is none other than the artist himself, whereas the line on the wall marks his height at the time when each picture was taken. This highly personal and probably nostalgic memory from He Xiangyu’s childhood is at stark odds with a giant square egg crate on the adjacent wall, with one real egg in it. 3,500 grams of pure gold were used in the creation of this outlandish structure. The material in this case allegorically represents China’s economic growth, which happened to coincide with the imposition of strict demographic control. 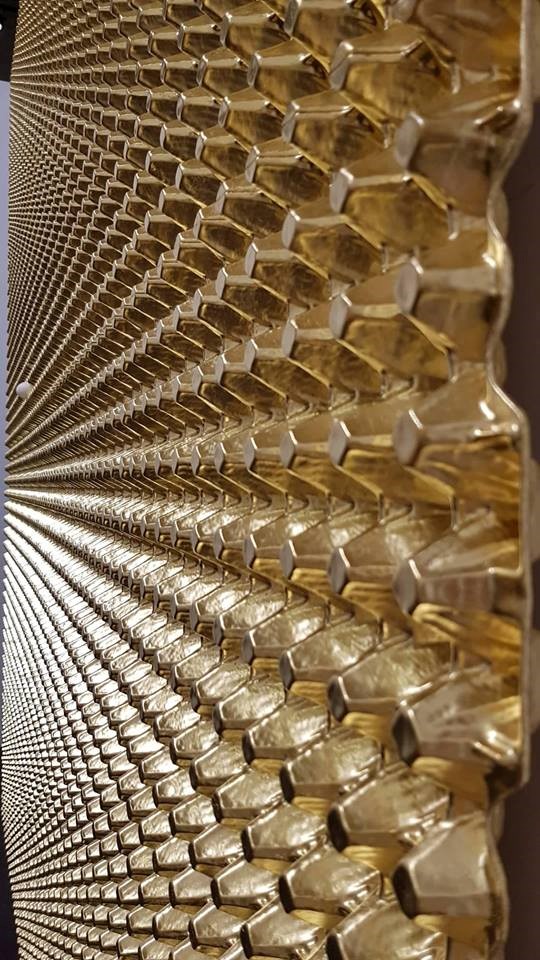 Another work that leaves no viewer indifferent is Rashid Johnson’s ecosystem installation, Antoine’s Organ. It represents the so-called post-black art, exploring the African-American identity from the perspective of contemporary critical theory and sociological analysis. Johnson himself describes his art practice as follows, “The goal is for all of the materials to miscegenate into a new language.” The principle is implemented in Antoine’s Organ, where the cells in black scaffolding shelter book stacks, potted plants decorated by the artist himself, shea butter busts, and video monitors playing the artist’s earlier videos, all created under the influence of the culture of the African diaspora. Inside this green artificial space stood a piano; throughout the fair, musicians would occasionally play on it, according to a predetermined schedule.

The work was presented by Hauser & Wirth Gallery. 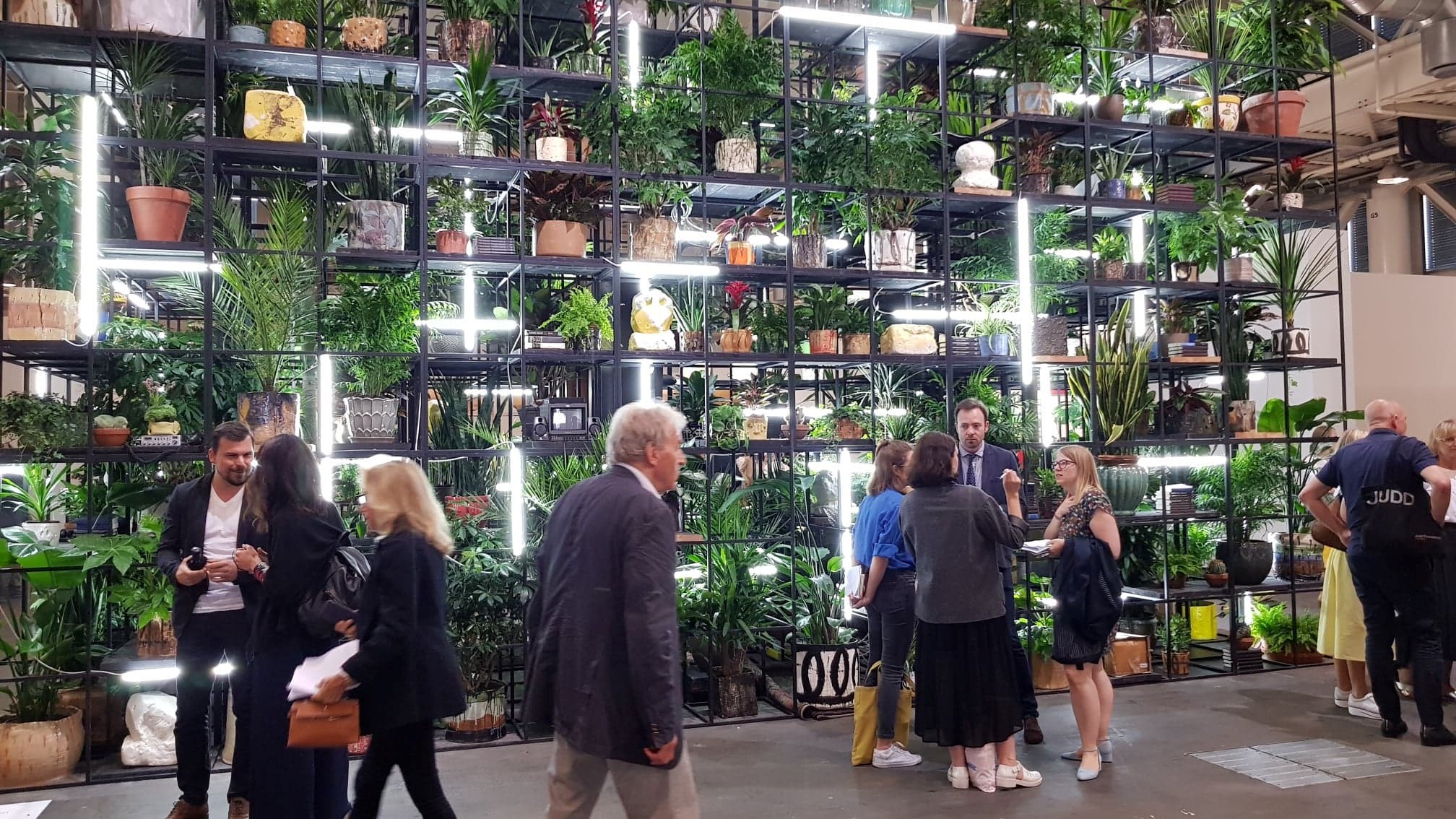 Another participant, Yoko Ono, inevitably drew attention too. Her installation Mend Piece, conceived as far back as in 1966 and recreated multiple times since then, enjoyed success at this year’s Unlimited too. All visitors are invited to try their hand at mending broken cups assorted at the table, with everything that might come in useful (including, though not limited to glue, ropes, ribbons, and more) at the ready. Ono encourages the project’s co-creators to place the new ceramic objects on shelves on the snow-white walls of the room hosting the performance. The artist herself notes the parallels between mending and healing, commanding, “Mend with wisdom mend with love. It will mend the earth at the same time.”

The project became the signature piece for Galerie Lelong & Co at Art Basel 2018. 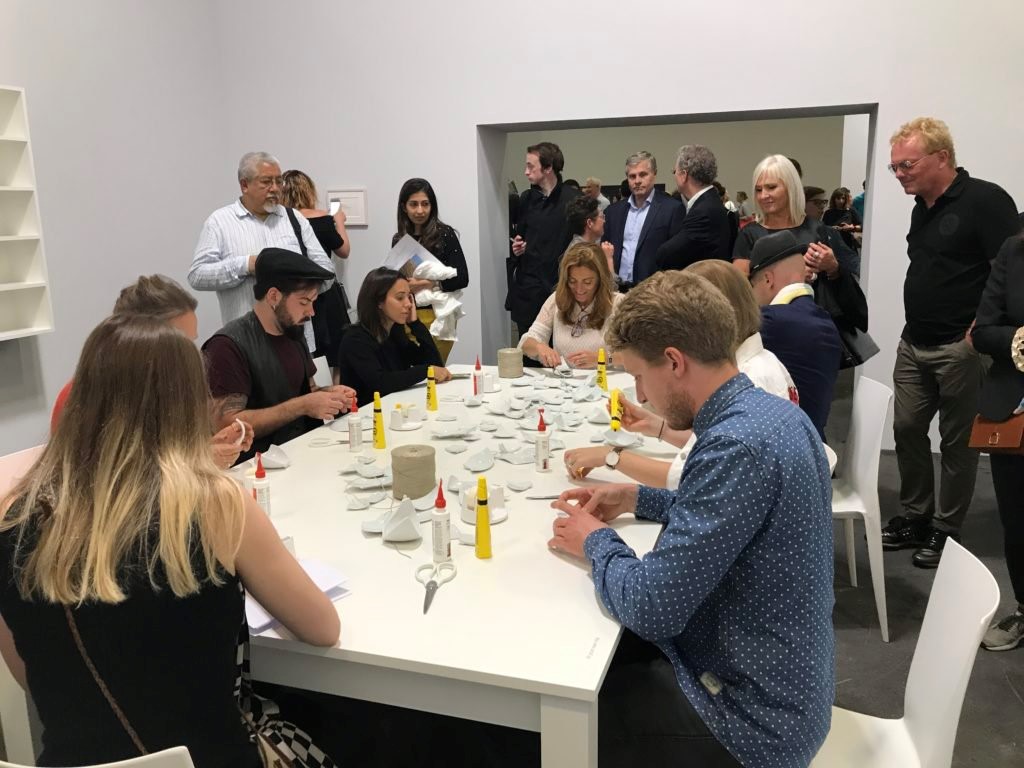 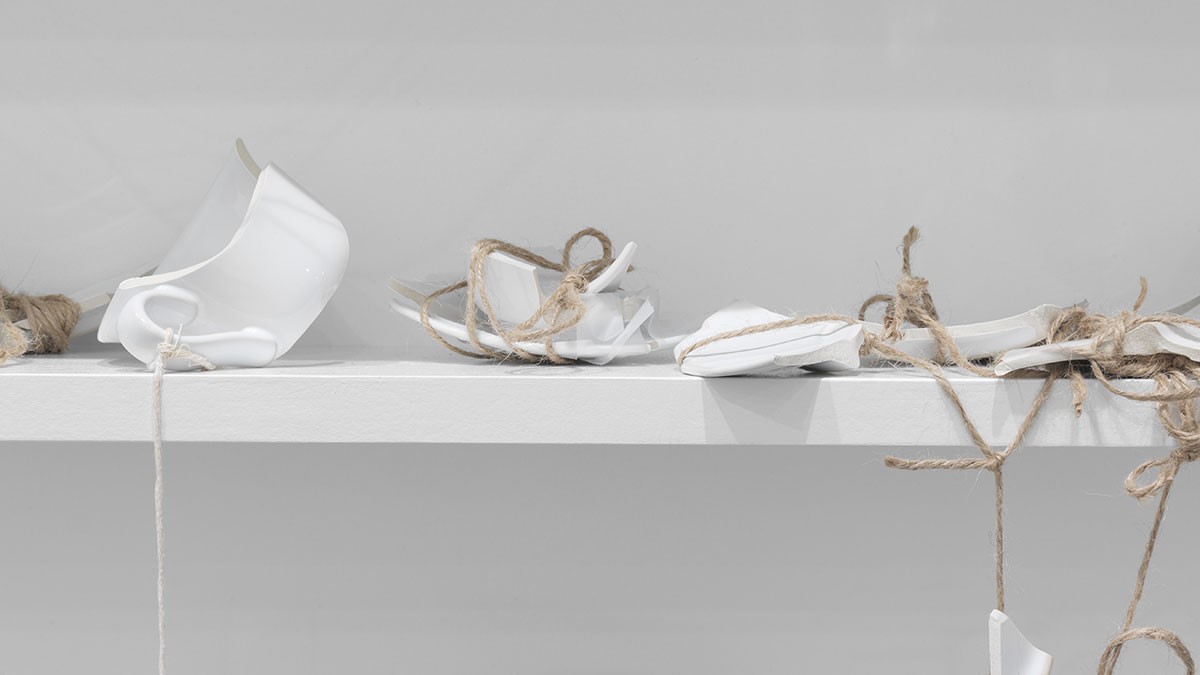 Yoko Ono, a photograph of Mend Piece project (ongoing since 1966) 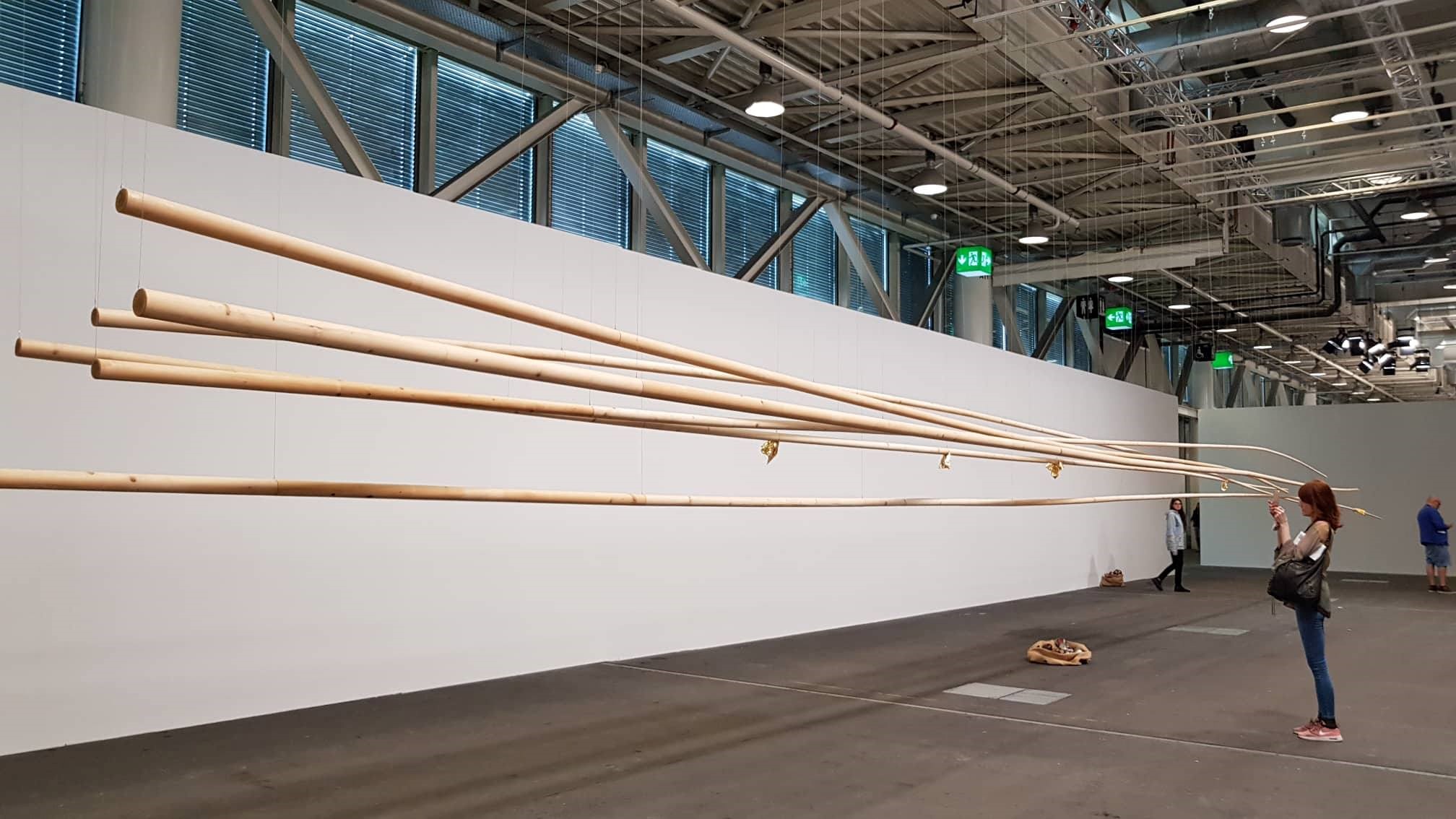 Ana Lupas, Christmas Trees for the Years to Come (1993) 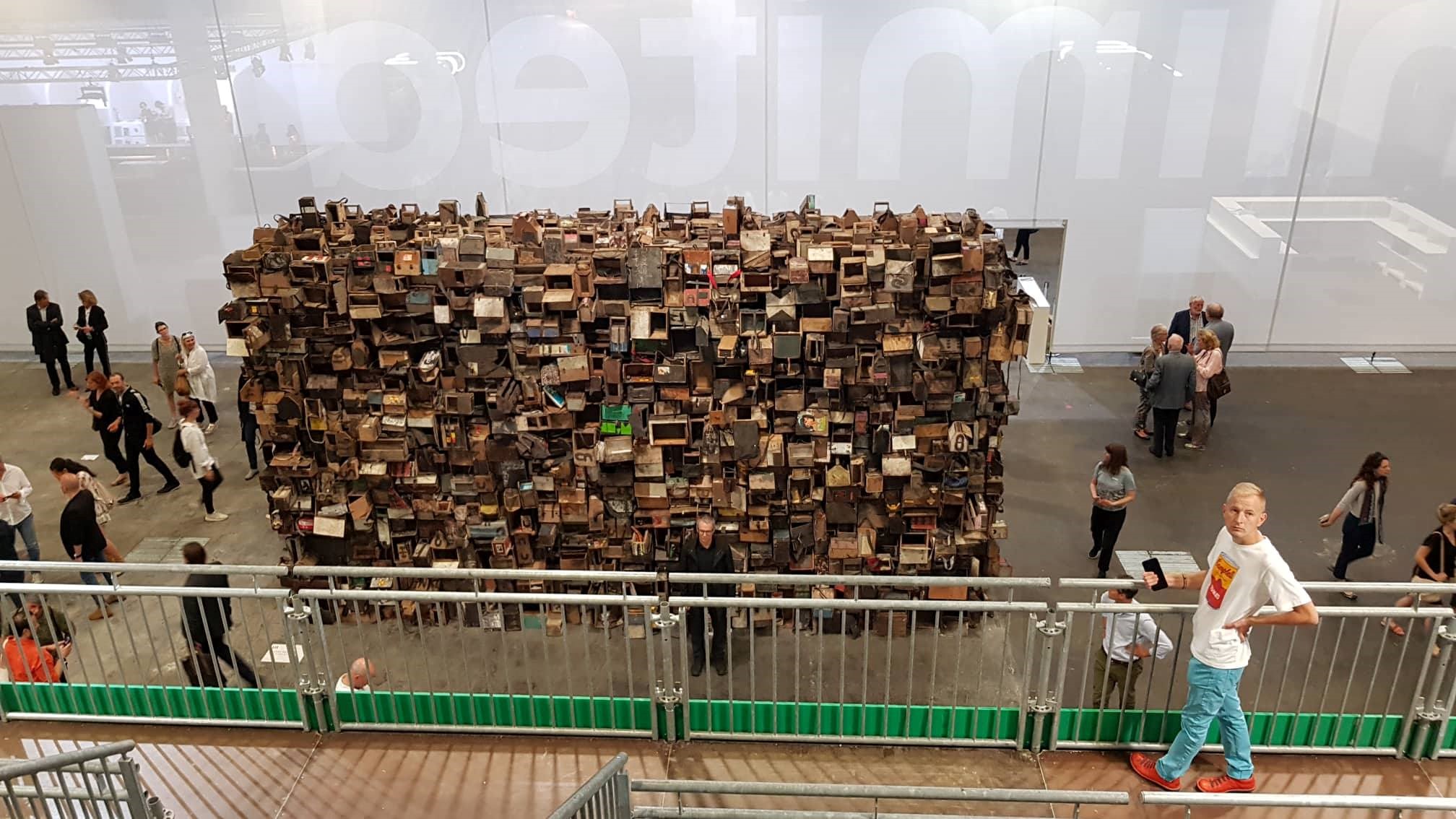 Dan Graham S-Curve for St. Gallen, with its singular blending of sculpture and architecture, is worth a mention too. Graham’s artistic strategy can be described as choosing the shapes and materials (steel, wood and a two-way mirror in this case) that create the effect of ambiguous, blurred perception. When interacting with S-Curve for St. Gallen, the viewers might find it hard to tell the inner from the outer, the real from the illusory.

Graham himself compared S-Curve for St. Gallen to “geometric forms inhabited and activated by the presence of the viewer, [producing] a sense of uneasiness and psychological alienation through a constant play between feelings of inclusion and exclusion.” Graham’s S-Curve for St. Gallen invites viewers to consider the role of architecture as means of self-expression, a marker of social changes, and the lens through which we look at ourselves and others. 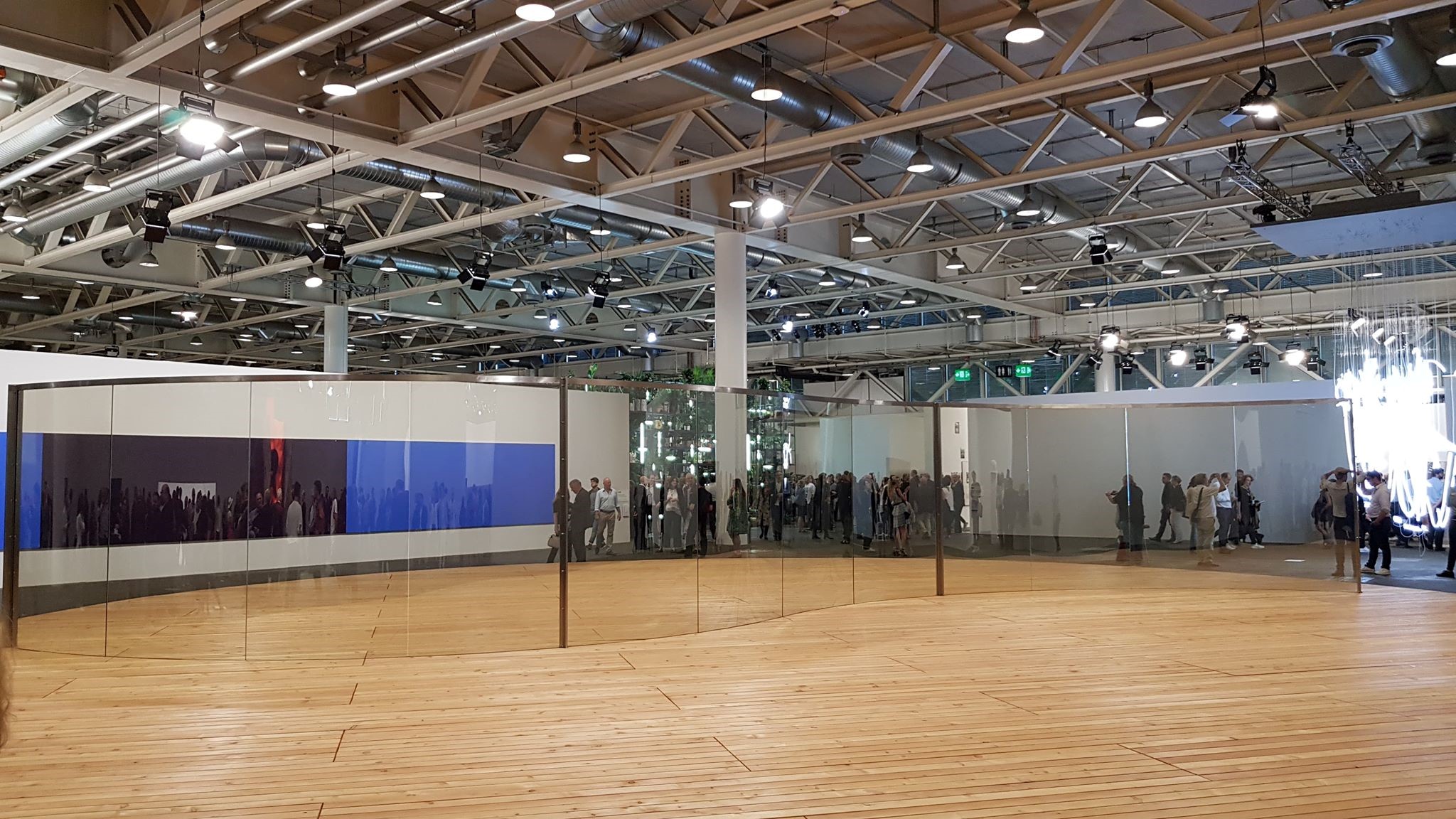 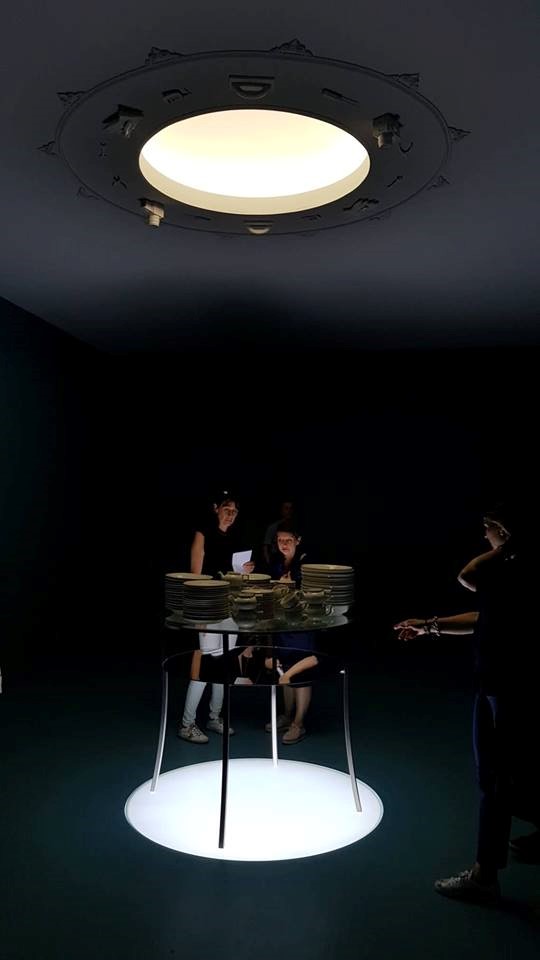 Many viewers gravitated towards José Yaque’s installation TUMBA ABIERTA III, presented by Galleria Continua. The artist himself described the work as follows, “Open Tomb is a type of transforming archive in which we see how many natural elements, in their infinite variety (plants, seeds, fruits, leaves), are transmuted through time, and in which the important fact is not losing or gaining new qualities but showing the permanent change of things. Open Tomb is that: an invitation to see the intrinsic beauty of the constant transfiguration that is also real in ourselves.” 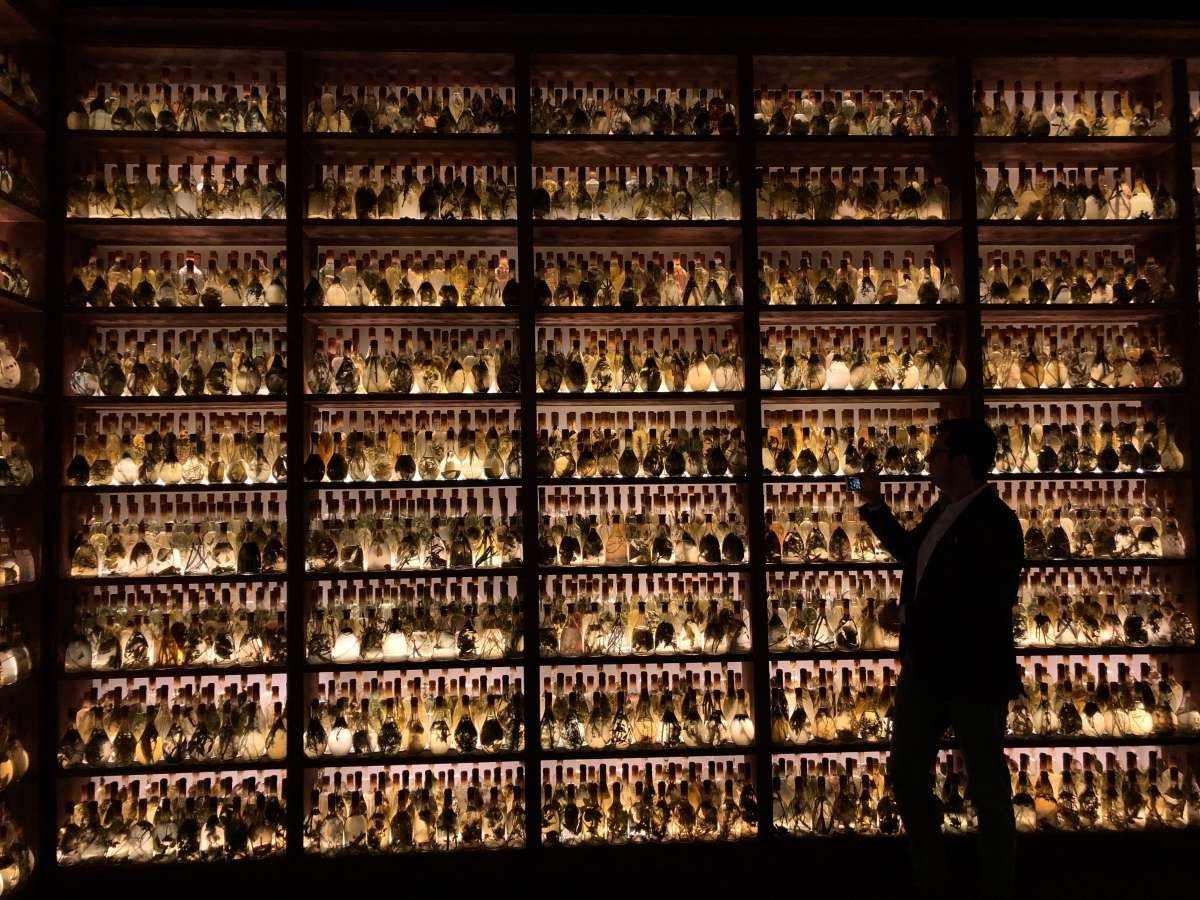 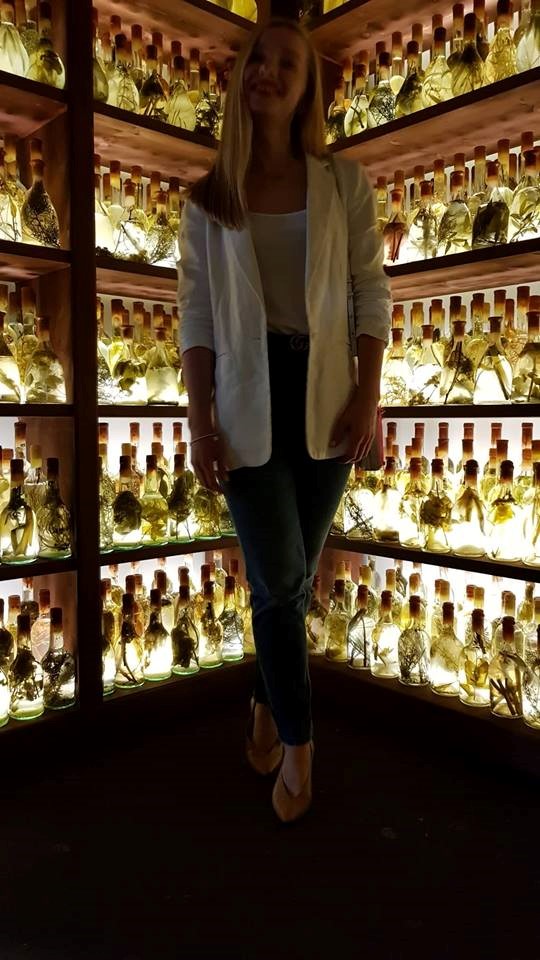 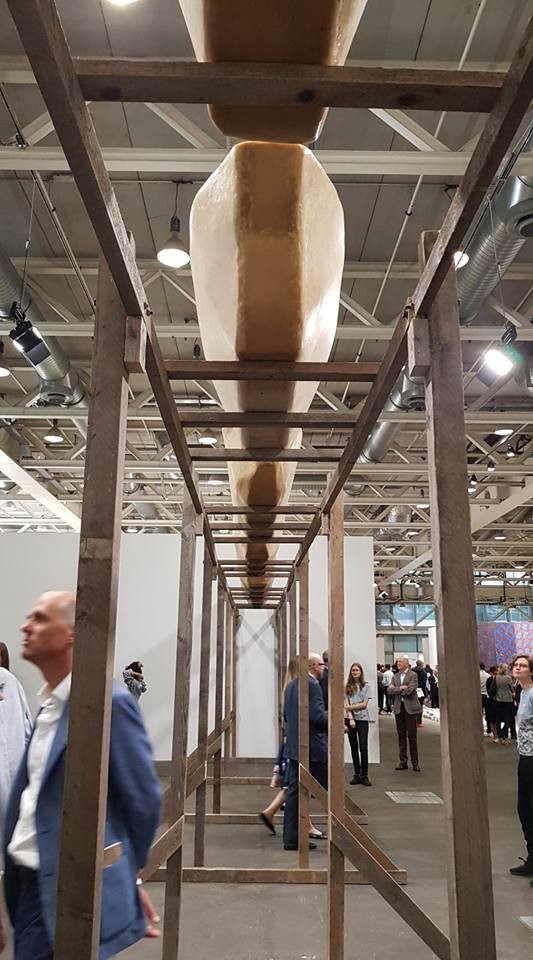 Wolfgang Laib, You Will Go Somewhere Else (1995) 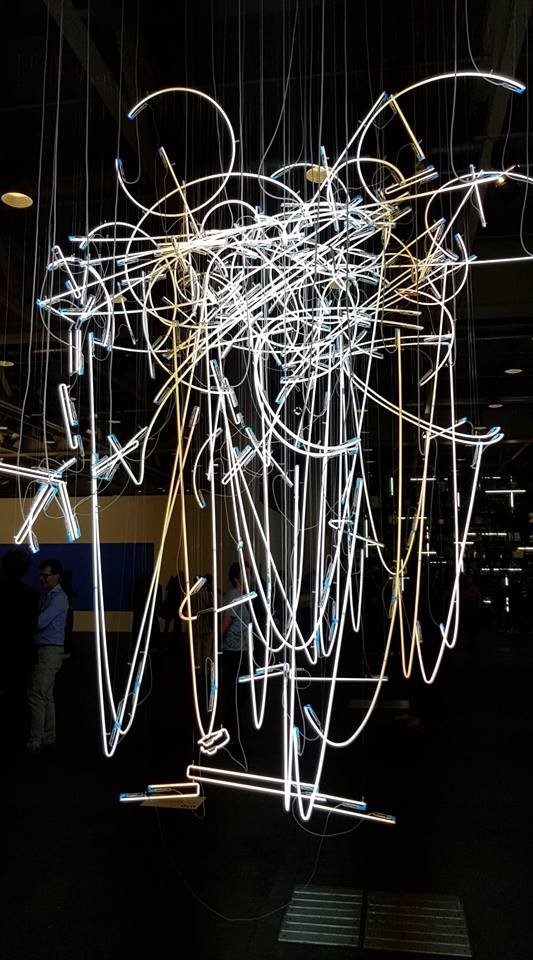 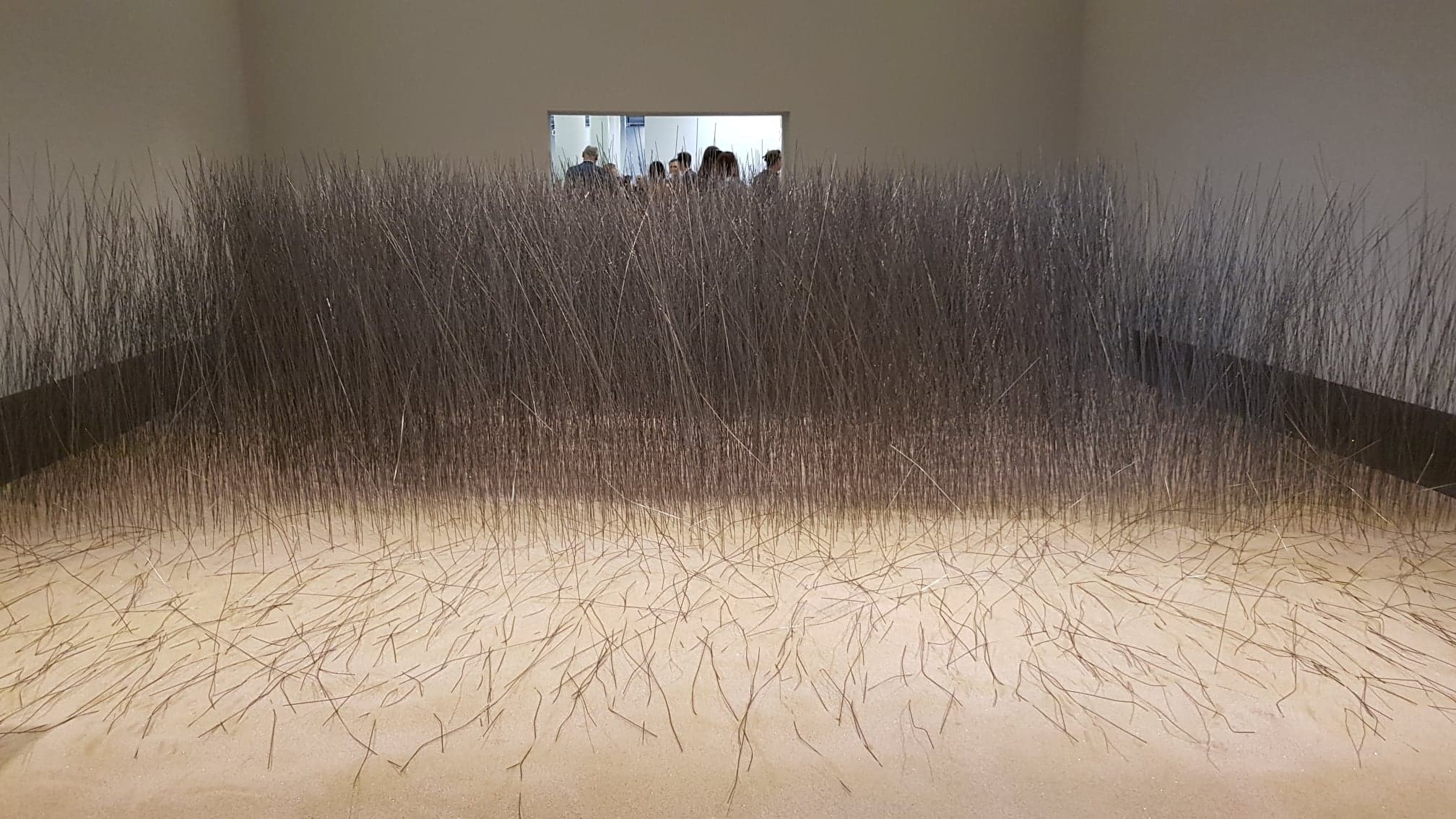 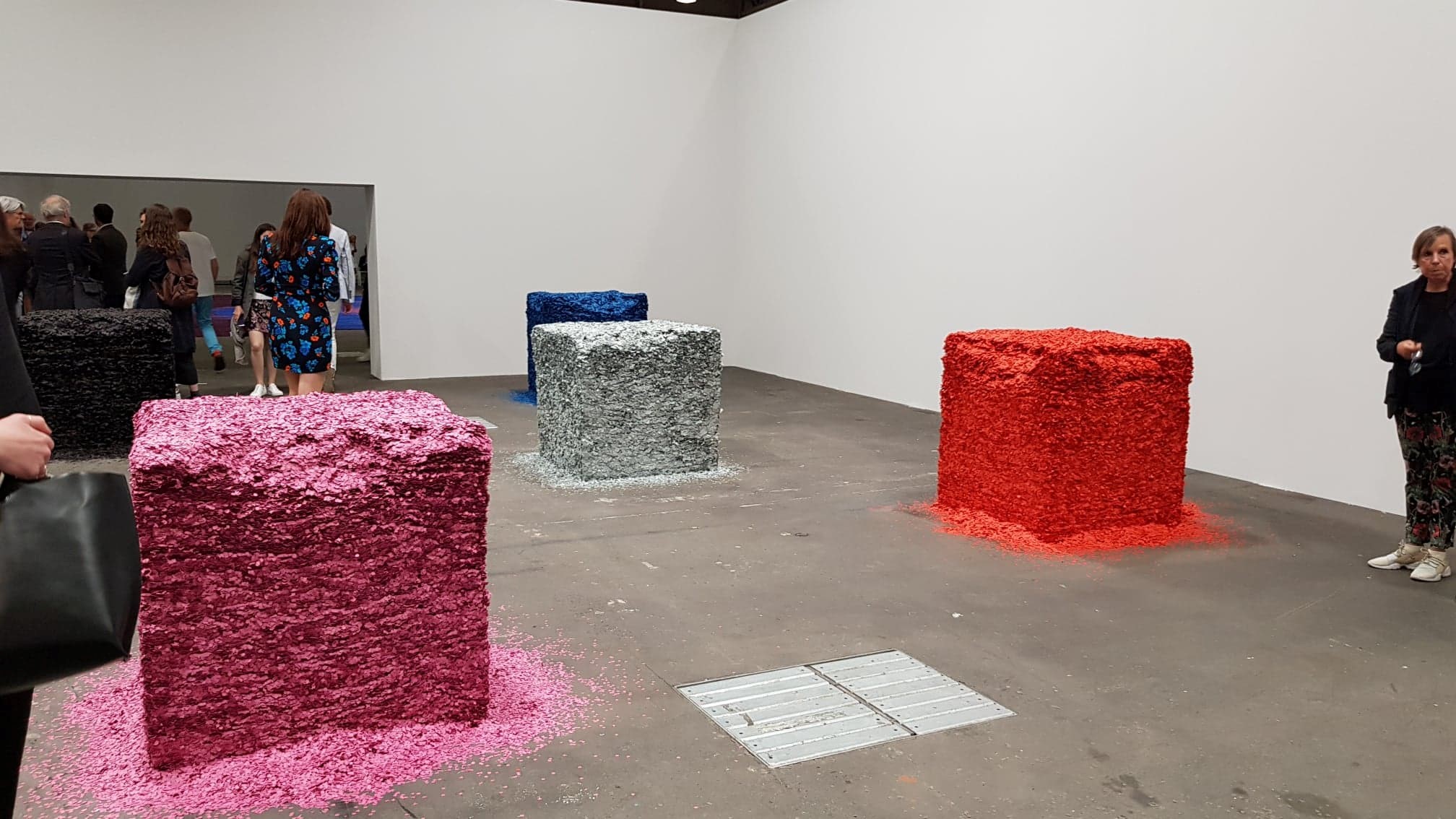 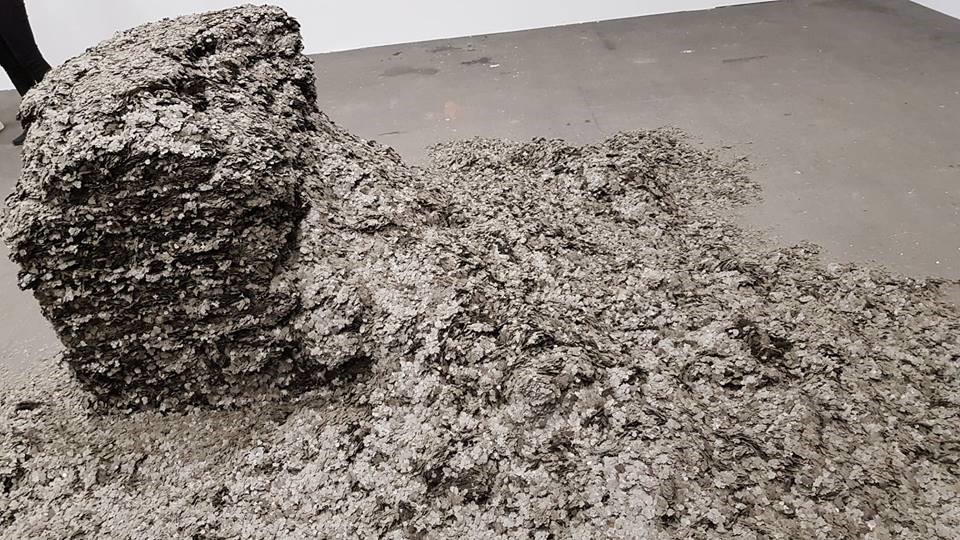 To conclude, we would like to say that the section title Unlimited is a good descriptor not only of the scope of the works amassed under the pavilion’s roof, but also of the boundless desire to see, marvel and think that this section’s program elicits in each viewer through the years.