the opening of the largest ever exhibition of the Netherlandish artist

The Kunsthistorisches Museum Wien is currently hosting the first ever major exhibition of the Netherlandish painter Pieter Bruegel the Elder. The event marks the 450th anniversary of his death, which falls on 2019.

The general view of the exposition

The exposition of the Kunsthistorisches Museum Wien currently features approximately half of all works ascribed to Pieter Bruegel the Elder. The organizers themselves describe the exhibition as “a small miracle,” and it is hard to disagree: many of the paintings on wooden panels brought for the Vienna show were considered too fragile to leave their hometowns often, and some were not even open to the broad public. Some works underwent renovations specifically for this show, including the famous Triumph of Death, on loan from Museo Nacional del Prado.

Bruegel is widely known for having revolutionized genre painting. His narrative manner and a critical perspective on the realities of his time allowed the artist to recreate the atmosphere in Europe during Reformation both precisely and allegorically. His apocalyptic landscape The Triumph of Death is a good example. The power fate has over humankind is framed as a standoff between a crowd of skeletons and a crowd of human beings. Multiple details that invite lengthy contemplation exemplify the vanity of human resistance to the inevitability of death. The triumph of death seems absolute, because there’s not a single detail pointing towards a different interpretation: two skeletons toll the bells hanging off a branch of a dead tree (raising the rhetorical question: for whom the bell tolls?); a skeleton shows an empty hourglass to a horrified ruler; an army of skeletons hold coffin lids for shields.

Pieter Bruegel the Elder, The Triumph of Death (1562)

And yet, it would be unfair to describe Bruegel exclusively as a skeptic and a satirist. His works are not devoid of light friendly humor either. For example, in The Return of the Herd one cow meets the viewers’ gaze. The animal seems to be aware of someone’s presence beyond the reality of the painting, and establishes eye contact with them.

Pieter Bruegel the Elder, The Return of the Herd (1565) 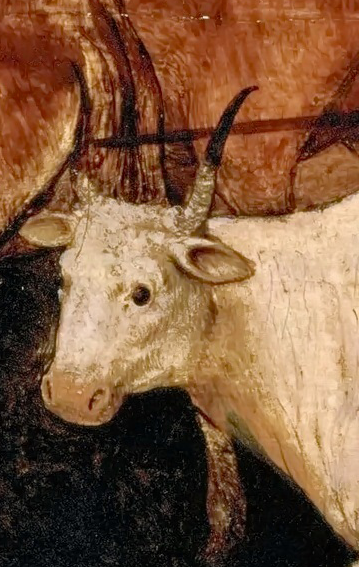 Pieter Bruegel the Elder, a fragment of The Return of the Herd (1565)

The exhibition at Kunsthistorisches Museum Wien creates multiple opportunities to discover and rediscover Bruegel. The panoramic view of the artist’s oeuvre allows the viewers to explore in-depth how the artist developed and adjusted certain motifs and plots. For example, the show brings the first opportunity to compare in the flesh the two versions of Bruegel’s Tower of Babel: the 1563 version from Kunsthistorisches Museum Wien, and its “twin” from Museum Boijmans Van Beuningen (Rotterdam, the Netherlands), almost four times smaller than its “Vienna counterpart.” Although the exact dating of the Rotterdam Tower of Babel remains unclear, X-ray analysis suggests that it was created later than the Vienna painting. This same analysis also attests that the images started out as identical: Bruegel decided to experiment with composition and details when working on the second, smaller Tower. 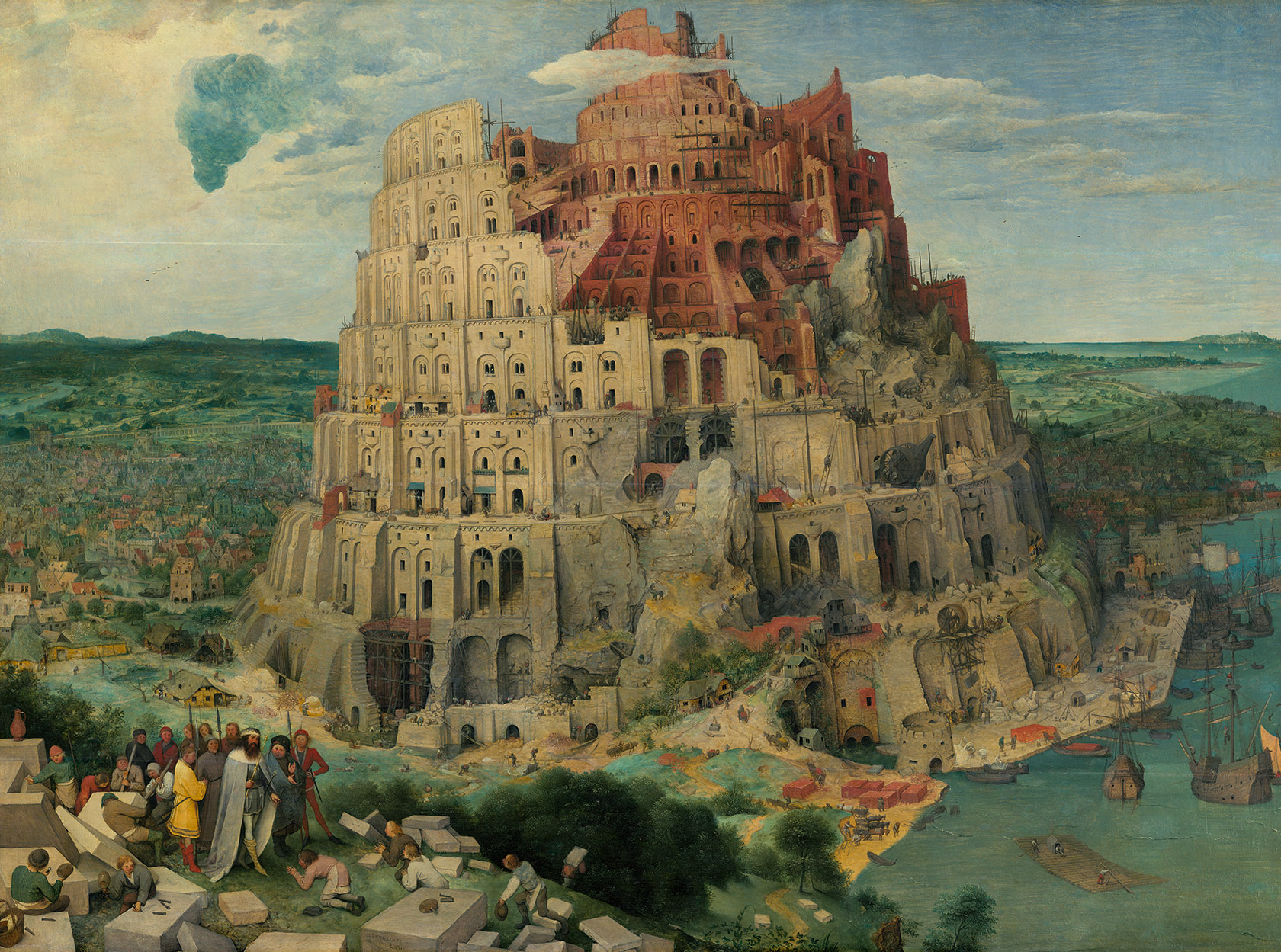 Pieter Bruegel the Elder, The Tower of Babel (1563) 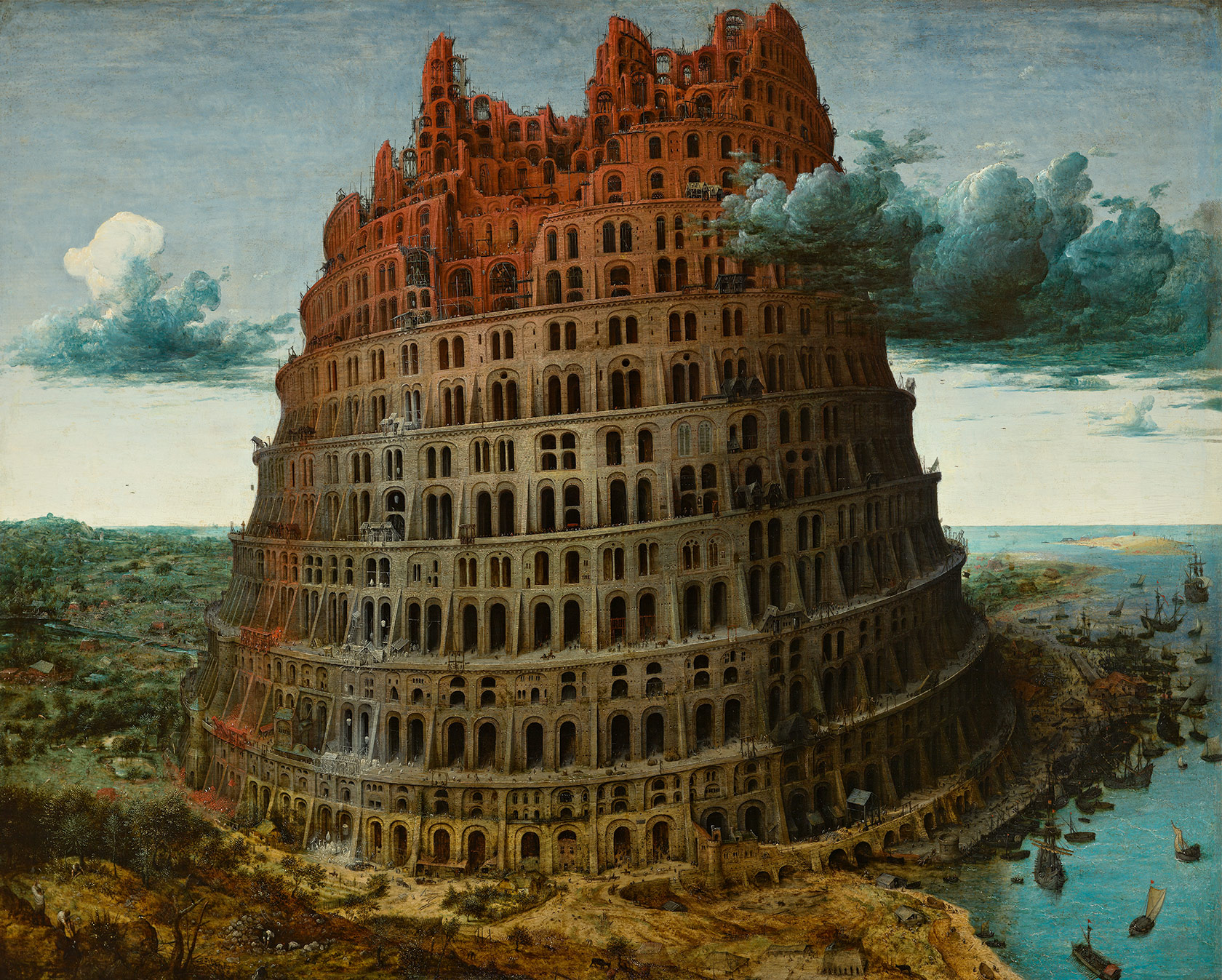 Pieter Bruegel the Elder, The Tower of Babel

Comparing the two paintings, we can see that the Rotterdam Tower is larger in scope despite being smaller than its Vienna counterpart: see the ratio of the tower to the boats in the haven by its foot. Additionally, the towers, while similar in shape, represent two different types of structures. The Vienna tower seems to be carved from rock, as seen in rough boulders: humankind enters a symbiotic relationship with nature and harnesses its resources. The Rotterdam tower, meanwhile, is built of bricks, and Bruegel chose a much darker palette to dramatize the image.

By paying close attention to minute difference between the two towers of Babel, a viewer can see for him- or herself that Bruegel is in the details.

Fragments of X-rays of The Tower of Babel

The work from the collection of Kunsthistorisches Museum Wien

The viewers can also see for themselves that Bruegel is not just a master of peasant scenes, which earned him the nickname of “Peasant Bruegel.” Nadine M. Orenstein, a curator at the Metropolitan Museum of Arts (New York, the USA), underscored Bruegel’s mastery at rendering the natural world: he was “able to capture weather like no other artist.” The Hunters in the Snow, in which Bruegel visualizes the freezing winter air through gray-green palette, is a good illustration for Orenstein’s statement. The Hunters in the Snow is one of Bruegel’s most famous works, so no overview exhibition of his could be considered full without it.

Pieter Bruegel the Elder, The Hunters in the Snow (1565) 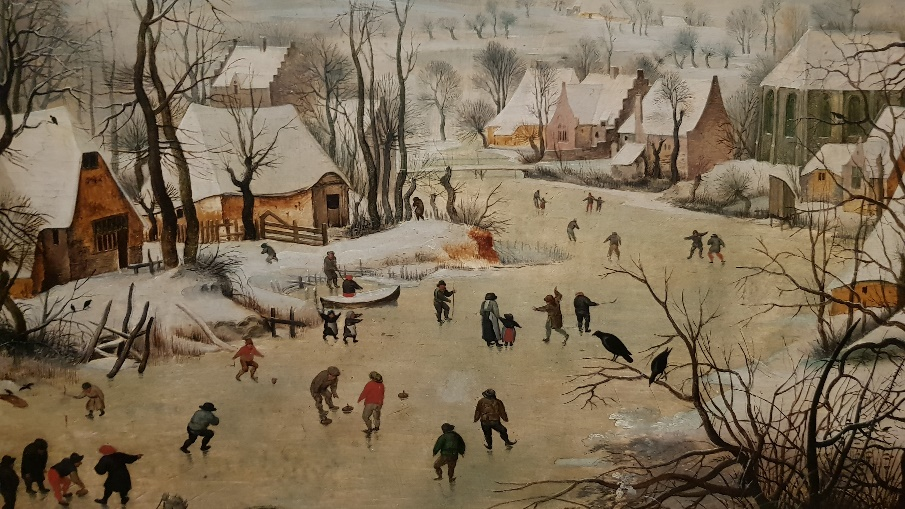 Pieter Bruegel the Elder, a fragment of Winter Landscape With a Bird Trap (1565) 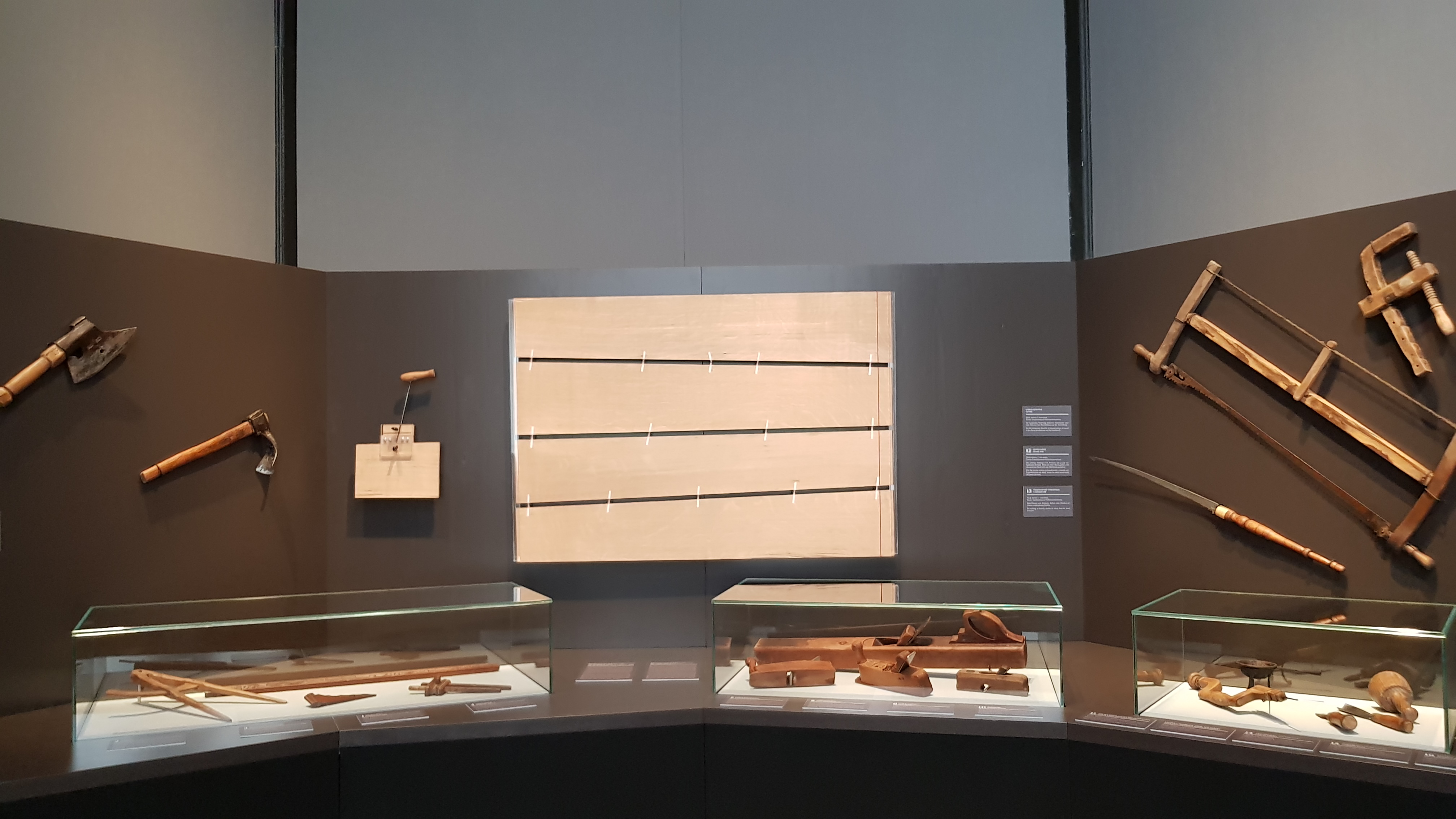 The exhibition also features Bruegel’s wimmelbilder, paintings rich to the point of oversaturation in figures and details. They give ground for comparisons between Bruegel and Hieronymus Bosch, another representative of the Northern Renaissance. His Battle Between Carnival and Lent, Dulle Griet and the already mentioned Triumph of Death all belong to this category. And yet, despite formal similarities in composition, there is a significant difference between Bruegel and Bosch: while the latter works with Biblical themes, Bruegel focuses on depicting quotidian life. Commenting on the parallels between the two masters, Joseph Koerner, professor of the history of art and architecture at Harvard University, wrote that Bruegel “brought the diabolical visions of Bosch down to earth, first to the realm of human culture, then to the realm of nature.” 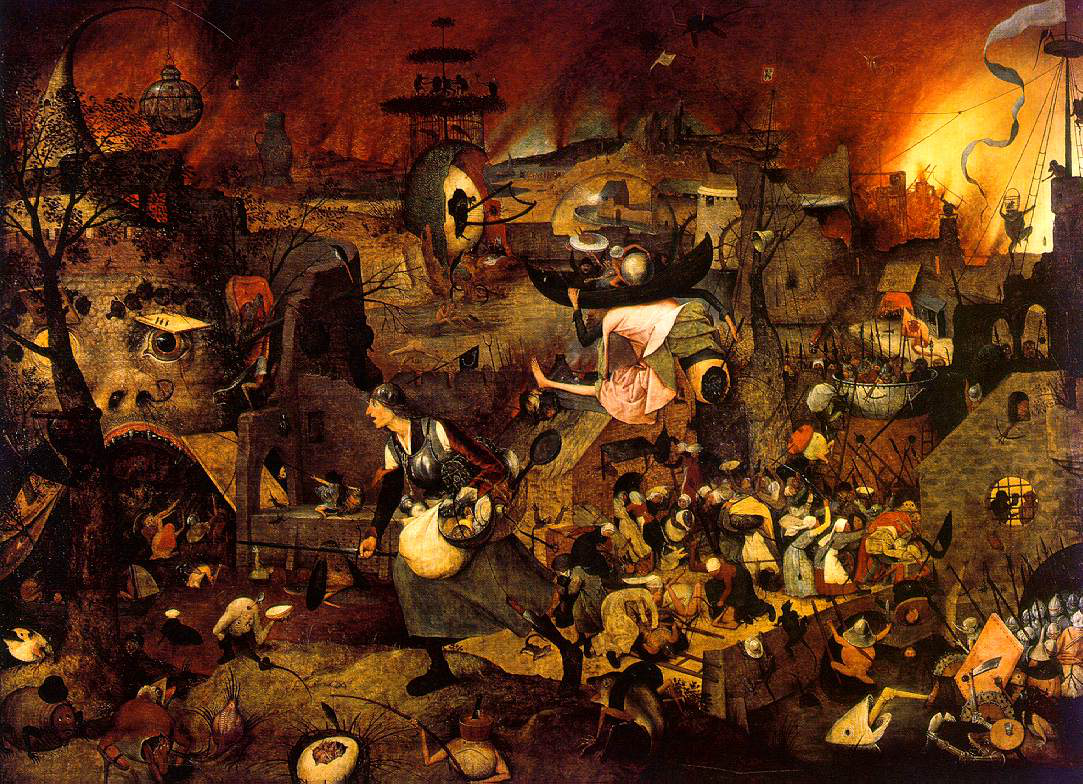 The large-scope project at Kunsthistorisches Museum Wien was made possible by the support and collaboration of multiple institutions. Most of them are European, including the National Gallery in London, Musées royaux des Beaux-Arts de Belgique in Brussels, Louvres in Paris, Museum Mayer van den Bergh in Antwerp, Belgium, Museo Nacional del Prado in Madrid, Spain, and more. The two “transatlantic” participants, the National Gallery of Art in Washington and the Frick Collection in New York, are worth special mention. Their contribution enhanced the scope of the project of Kunsthistorisches Museum Wien.